Why The Cast of Raveena Aurora’s New Music Video Is So Special | Milk Blog
NEW: FREE VIRTUAL CONSULTATIONS. BOOK HERE.
Please click here for a note on our shipping.
Free Shipping on all $30+ orders. 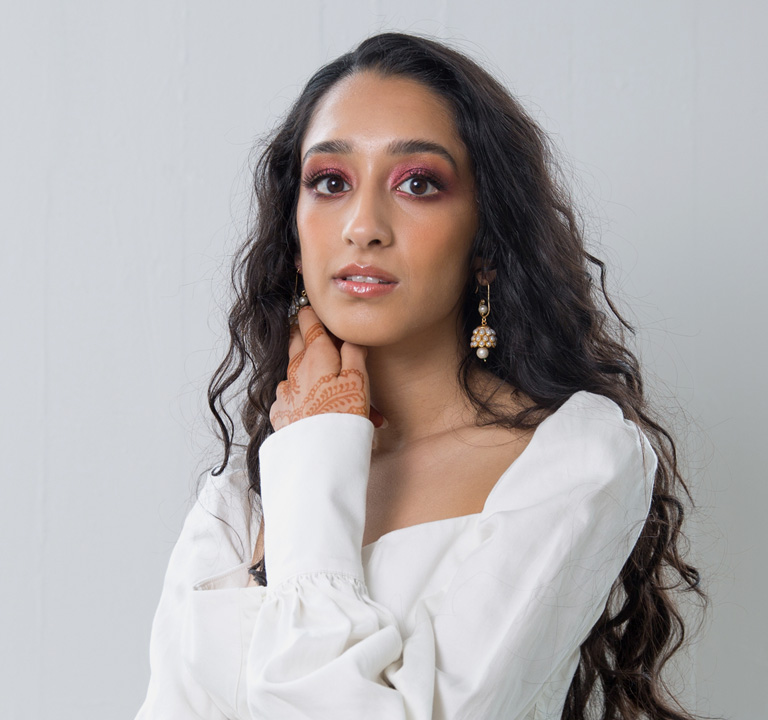 If this seemingly never-ending winter has you doubtful that spring will ever fully arrive, New York-based R&B singer Raveena Aurora is here with a brand-new music video for her latest song, “Honey,” to transport you to a place of warmth, love, and the blossoming potential of a new season. Scrolling through Raveena’s Instagram feed feels like entering a tranquil universe decorated with healing crystals, bursts of flower bouquets, and dreamy self-portraits paired with candid captions that invite you into her mindset. Cue her soulful music to catch Raveena opening up about living with anxiety, overcoming panic attacks, empowering women, and her current journey to loving herself. In her new video, out on May 2nd, Raveena called upon some of the friends she’s connected with on social media to create a stunningly hypnotic scene, featuring people of color in ultra-romantic montages (a few of the couples are in IRL relationships). “There isn’t enough representation of LGBTQ couples and people of color. I wanted to show them in an absolutely beautiful, sensual, feminine light. In American media right now, South Asian people especially don’t have a huge voice or aren’t seen in this way,” she explains of the enchanting visuals. The cast includes: Raveena, Nali, Dylan, Jordan, Priya, Harshvardhan, Has, Simran, Lee, and Vish. And they’re all wearing Milk Makeup (Milk + “Honey” is a great combo). We caught up with Simran, Lee, and Vish to chat about how they linked up with Raveena, their favorite examples of love, and how they practice self-care. Catch the full “Honey” music video Raveena co-directed with Weird Life Films on May 2nd.

*Raveena wears Milk Makeup Sunshine Oil massaged into her skin, Blur Stick applied on the center of her face to smooth and prep, Liquid Strobe in Beam to highlight her cheekbones, cupid’s bow, inner corners of her eyes, and Gold Foil Face Gloss on her lips. 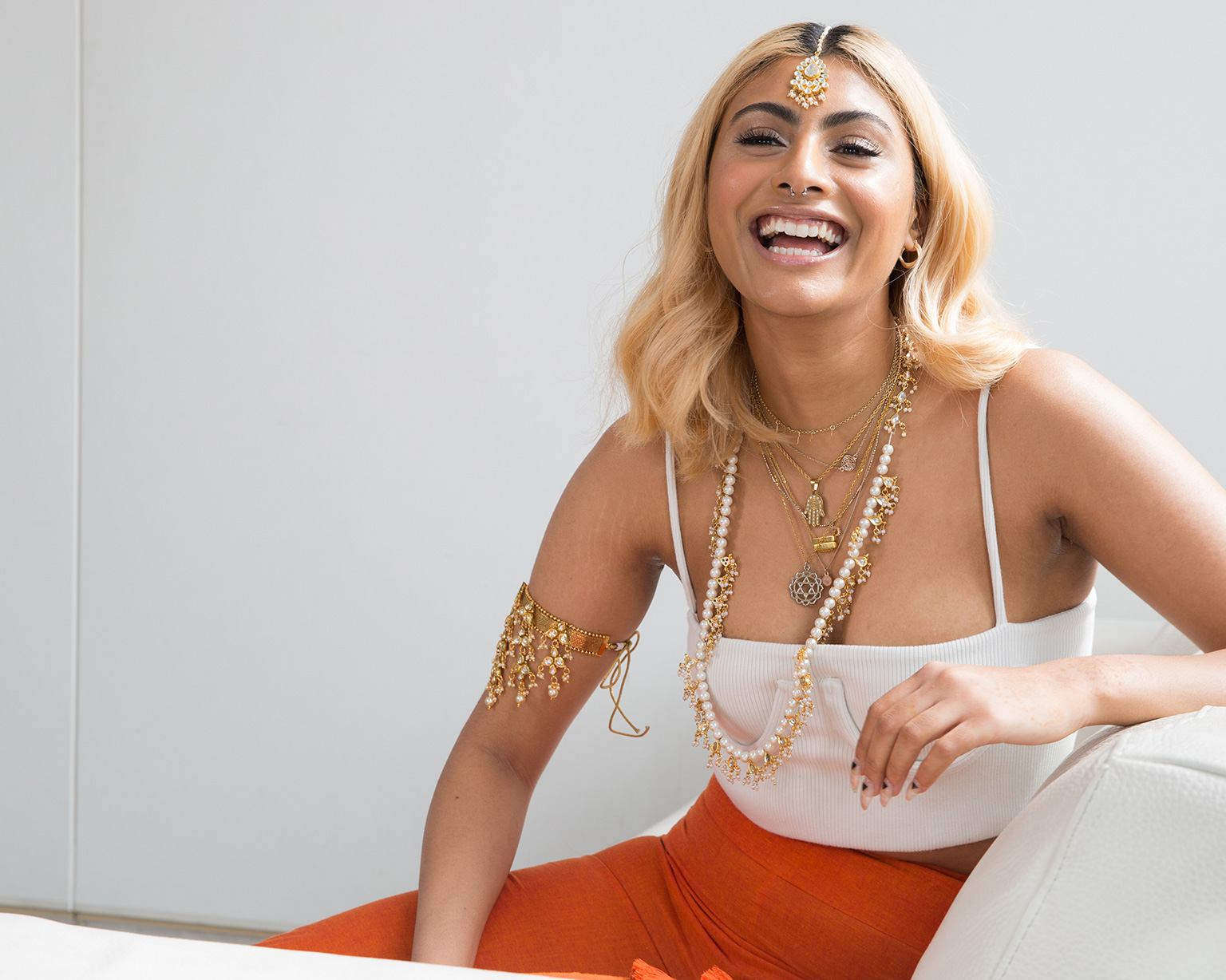 On how she linked up with Raveena:

“It’s actually a funny story. We literally followed each other on Instagram first. I’ve been a fan of her music for awhile, and we got talking online, and she was like, ‘I’m doing this video; do you wanna come out?’ So I said, ‘Ok! Cool!’ It’s my first time in NYC! I’m literally having the best time. It’s so overwhelming in a good way. I love London so much. New York is like London on steroids.”

On her favorite examples of relationships:

“One that comes to mind is the show Insecure. I don’t know if it’s a relationship in the typical sense, but I think the show depicts the dynamic of how people change before, after, and during relationships. Especially with Issa and Lawrence, and how Lawrence acted after the relationship. I feel like that was so true regarding how men can be.

Also, in some recent Bollywood movies — there’s one called Goliyon Ki Raasleela Ram-Leela which is kind of like the Indian version of Romeo & Juliet. I love that whole movie and the way they show passionate, intense love.”

On how she practices self-care:

“I think it’s definitely important for everyone to practice self-care and self-love. The way that I do it is very intuitive, and it sounds so cliche, but it’s just by listening to my body. Like yesterday, it was my fifth day in NYC, and my first four days were super overwhelming in a good way, obviously, but I was doing so much. Yesterday my body was just like, ‘I think you need to take it easy.’ So for me, it was literally staying inside all day, sleeping, watching Netflix, doing emails, and not actually actively doing anything. It looks different for different people, but for me it tends to be spending time alone inside.”

On her beauty routine:

“I get asked about my skin a lot, and I’m not sure why! It’s not amazing. I do have quite a specific skincare routine, but it does actually change. I think for my skin, the one thing that stays constant is that I try to use natural and cruelty-free brands. like Origins, or local products from London. For my beauty routine, I’m always open to changing. For me right now, I’m not so much into specific products, but more looks. I’m more into bold moments like green eyeshadows, glossy lids, fake freckles, or green lipsticks.

On her relationship with social media:

“It is definitely love/hate. But I think it’s more love because I have so many people who follow me and support me, which is a really weird thing despite them not knowing me personally. That’s so humbling. Also it has brought me so many opportunities I wouldn’t have gotten otherwise. But the hate part is in terms of the fact that I think I can put pressure on myself without realizing it. I think that’s one thing that NYC has taught me, to be carefree.”

*Simran wears Milk Makeup Sunshine Oil to prep her skin, Luminous Blur Stick applied to the center of her face and buffed out for lit-from-within smoothing, Liquid Strobe in Beam all over her eyes, and Gold Foil Face Gloss on her lips. 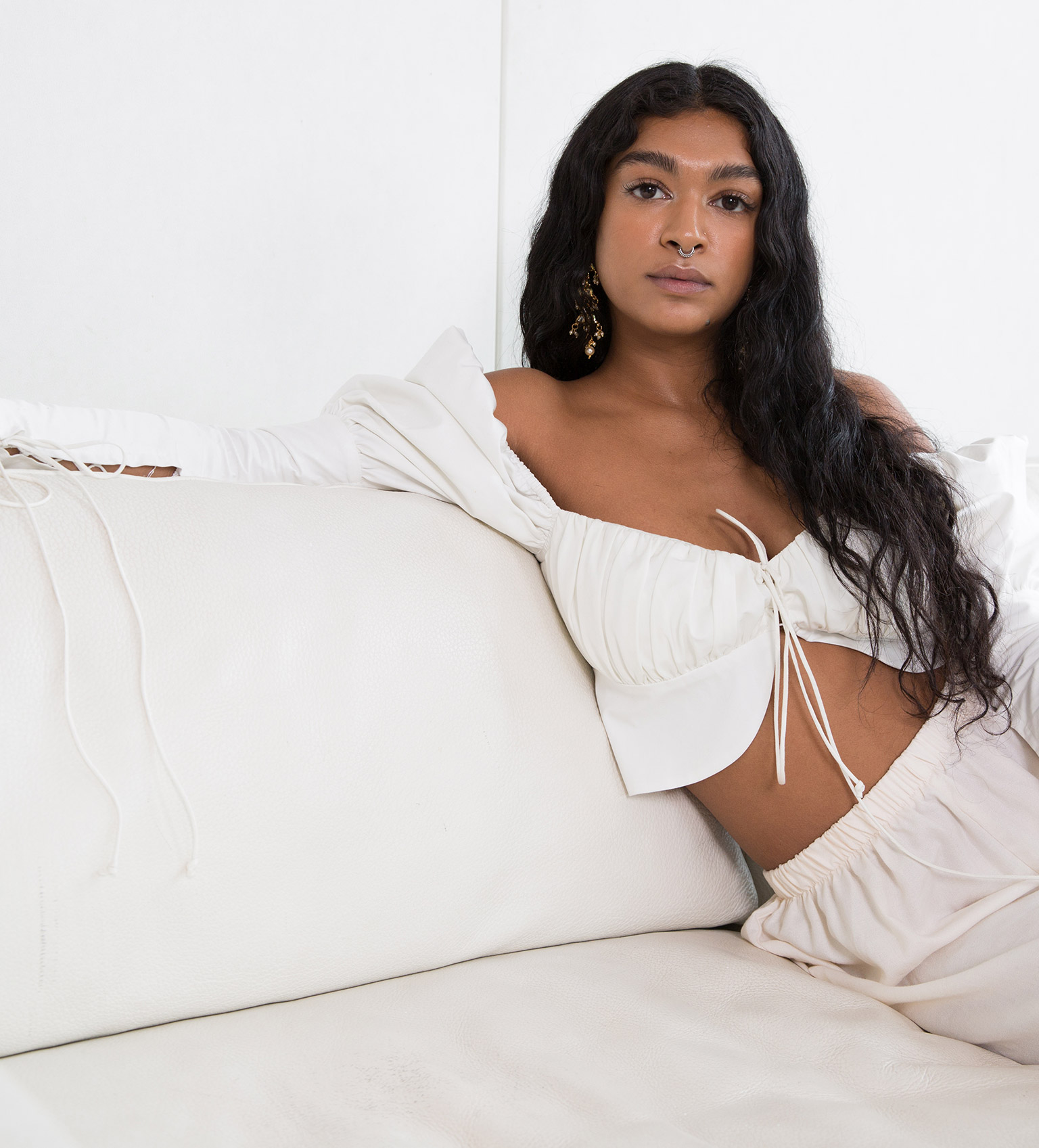 On how she linked up with Raveena:

“We met because I love her music. I checked it out a few times and loved it, and then we connected through Instagram. We found a day to get tea together and met up and have been friends since then.”

On her favorite examples of relationships:

“Something recently that’s been relevant to me in thinking about growing and life is that I’ve been gardening a lot. I think that is such a pure expression of love. Something that you’re nurturing, like planting a seed, giving it water, and it makes me thinks of my relationships and how it’s so important to nurture something — you know, give it that attention it needs so it will grow and blossom.”

On how she practices self-care:

On her relationship with social media:

“I’ve met some really amazing friends through being an artist and checking out other people’s work. I feel like it’s a really good way to build a community, as well. My approach to social media is really just trying to have a positive outlook and share a different essence than what our phones and devices usually present to us in this world. There has to be some sort of balance.”

*Lee wears Milk Makeup Sunshine Oil massaged all over her face and neck, Liquid Strobe in Beam on the inner corners of her eyes and to highlight her on face, Eye Vinyl on her lids, and Face Gloss applied to her lips and on the high points of her face. 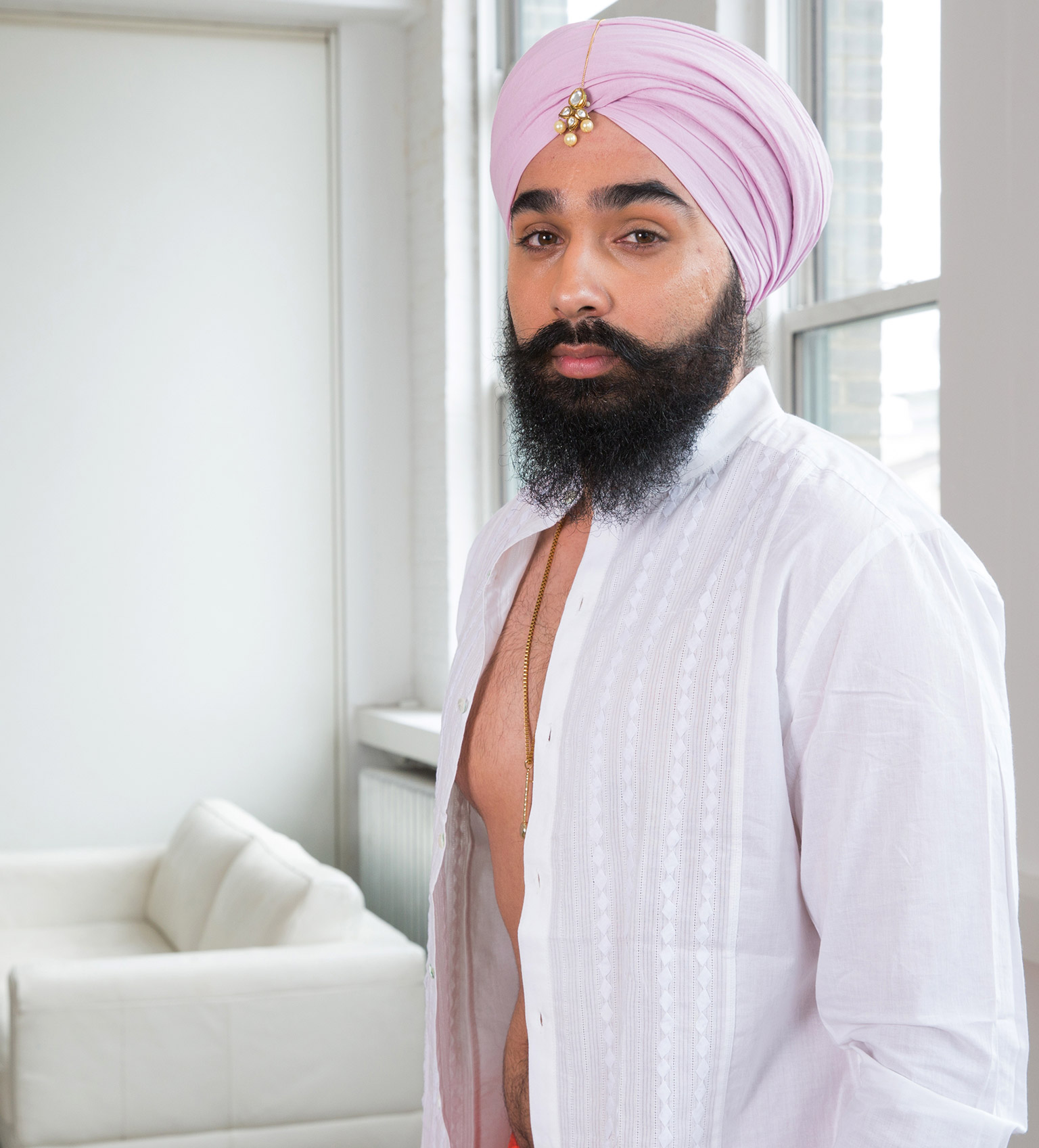 On how he linked up with Raveena:

“A mutual friend had reached out to me to let me know that a good friend of hers was looking for someone for a music video. I had never done a music video before; I mostly do a lot of print work, modeling, so I was super excited and told her to pass my contact information along, and he did that, and I guess it worked. So, here we are today.”

On his favorite examples of relationships:

“I got married a year and a half ago, so me and my wife are just living, and everything’s so happy, and it’s just an amazing thing. Marriage goes a long way, just getting to know your partner and the ins and outs. The little things matter the most, especially if you’re living together. There are so many new things I learned — you know, before marriage you only worry about yourself, and then you start worrying about the other person more than yourself, little things like that. You just start caring more and more.

In terms of relationships I look up to, I’m into music and hip hop so Jay-Z and Beyonce come to mind. At first Brad and Angelina when they were together, but it didn’t work, so I don’t think I want that goal, because they split up in the end, but when they were together that was the goal — the big power couples.”

On how he practices self-care:

“I think self-love is really important, it brings out the best in you and your most confident self. So things I do for myself: I’m into fitness, I try to stay fit, and eat healthy. My wife looks to me for guidance in that area, and it rubs off on her, so she’s doing the same thing. I like to keep a healthy living style. It’s a big part of my life.”

*Vish wears Milk Makeup Sunshine Oil all over his face and body, Blur Stick to smooth, Face Gloss applied to his cheekbones, and a touch of Liquid Strobe in Beam.

Why I’m Actually Dating All My Friends

Behind the Scenes: The Making of Kush Mascara