Why Can’t I Stop Deleting and Redownloading My Dating Apps? | Milk Blog
Need help? Hit up our Milk Makeup experts at advice@milkmakeup.com
Please click here for a note on our shipping.
Free Shipping on all $30+ orders.

Why Can’t I Stop Deleting and Redownloading My Dating Apps?

Once a month, I find myself going through a similar cycle. After a handful of bad interactions on my dating apps, I’ll get fed up and delete all of them. And I’ll be happy for a few weeks. But then a friend of mine will tell me about a cute guy she met on Hinge. Or I’ll be sitting home alone on a Friday night, feeling sorry for myself, and questioning whether or not I’ll ever actually find love. So, I’ll find myself in the App store, redownloading some of my old standbys, and once again rebooting my profiles.

Things will start out well. I’ll swipe right a few times, get a few dates on the calendar, and start to feel better about my prospects. But I’ll quickly feel overwhelmed, or beaten down if the dates go south, and the process of deleting will start all over again.

I truly never thought I would be an avid online dater —  I grew up with the mindset that people met in college, through friends, or out at bars. But when I turned 22 and wasn’t dating anyone I saw as marriage material, I decided to widen my net. I joined OkCupid when I was a junior in college, and then moved on to Tinder in my early twenties. By the time I turned 25, I was operating on about five apps at a time, using digital connections as my main source of finding dates. 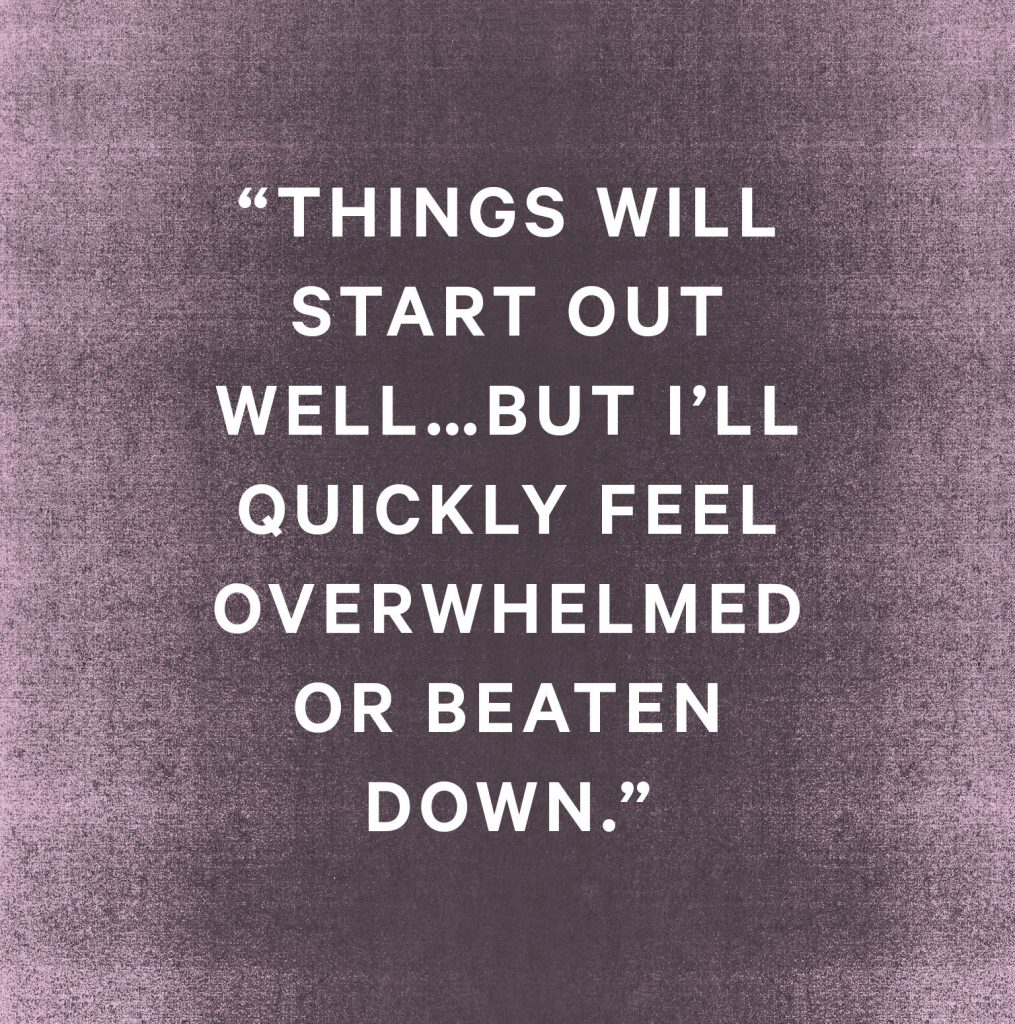 To say I burned out epically would be an understatement. The number of dates I was going on, and the amount of time I was spending swiping on the apps, made me completely shut down. My return on investment wasn’t all that high. Out of dozens of dates, only two turned into relationships — but not relationships in which I’d ever call the other person my boyfriend. All the energy I’d put into dates took a serious emotional toll. It got to the point where I didn’t want to do anything social — let alone go on a date. So, I deleted all of my apps for six months when I was 26, and enjoyed the idea of meeting people in the real world. After a while, though, I felt like I was ready to dive back in. I still loved meeting people IRL, but I still had the nagging feeling that dating online would increase my chances of finding “the one.” All my friends were dating, and the siren song of Bumble and Hinge (the two apps I use the most) called me back. So I redownloaded and tried to get back into the game. But eventually, I fell back into my old patterns.

I have a really hard time with moderation in life. Whether it’s cheese doodles or Netflix series or dating apps — I dig into something until I am completely sick of it. This creates a problem with dating. For whatever reason, I have difficulty swiping right on a person and just following the thread of that interaction to its end point. Instead, I have to swipe right on many people, have many conversations, and set up many dates. So I, of course, get overwhelmed — which leads to me just setting the whole thing on fire and deleting my apps.

And these patterns never make me feel all that great. When I delete the apps, I feel both a sense of relief and a sense of failure. My need to remove the apps from my phone is an indicator that I’m too involved in them, which makes me believe that I’m too obsessed with finding a boyfriend. And as someone who prides herself on being an independent woman who doesn’t need a man, that makes me feel like shit. But my inner voice starts to whisper, “You are going to die alone” whenever a friend finds a new relationship, I get an invitation to another wedding, or another family member gets pregnant. So, I redownload, but that makes me feel even more pathetic. You know the feeling you get when you respond to a text message from a person who you 100% should cut out of your life? That disappointment in yourself? That’s the sensation I get whenever I head to the App store to redownload Hinge. I no longer feel excitement at any point in the dating app process. I just feel hopeless and fearful.

This is all wrapped up in the fact that I really want to meet someone and fall in love. And for some reason, I have this idea in my head that the only way to do that is through dating apps. And it’s not like I have a hard time meeting people in the real world. As a freelance writer who works mainly out of coffee shops and coworking spaces, I am surrounded by attractive guys all the time. But since I don’t know what a guy’s situation is — whether he’s single, whether he’s interested in dating someone, whether he’s even interested in me — I have a hard time transitioning those interactions into meaningful conversations. So, I go back to the dating apps, because at least there I know the guys are interested in some kind of interaction. 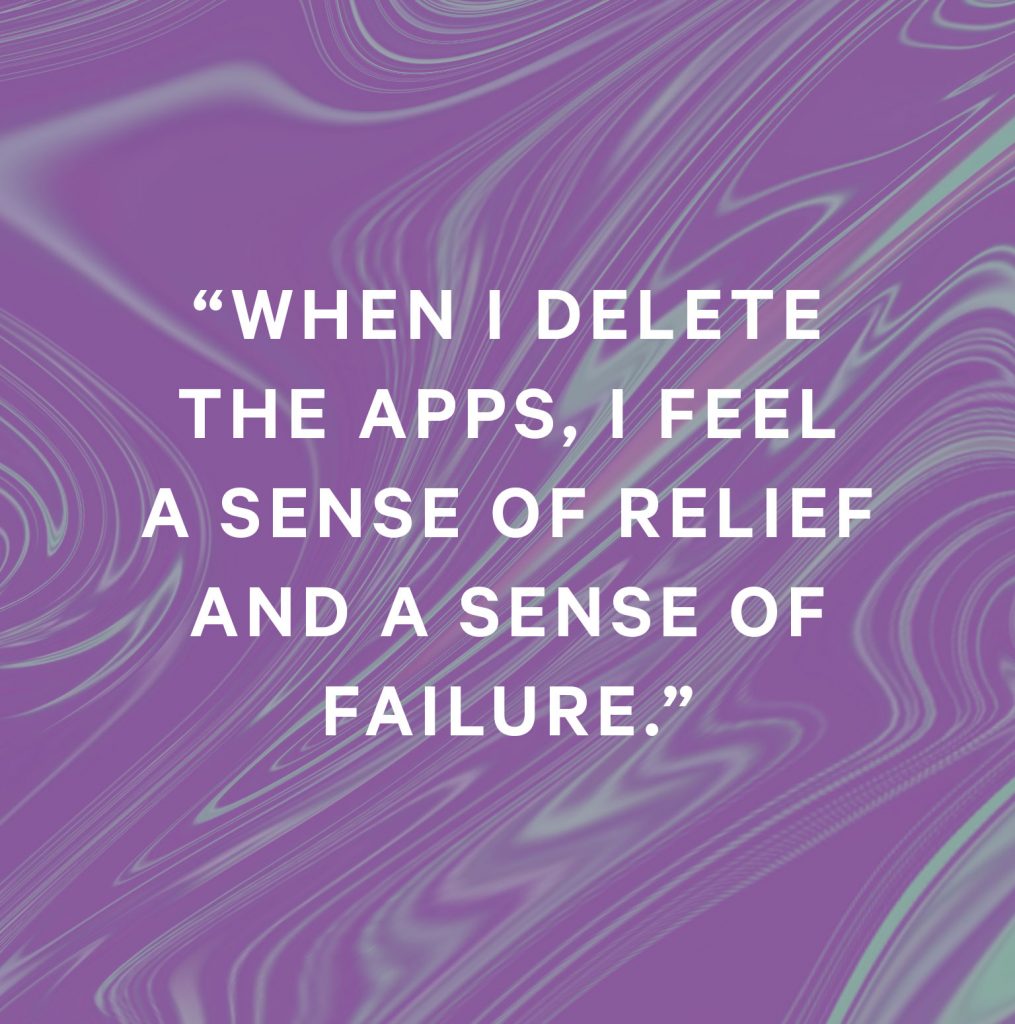 Lately, though, I’ve found myself pulling away from the apps without the frantic feeling of needing to delete them — and it’s likely got something to do with where I am in my life. I still really want to meet someone, but that goal isn’t a priority at the moment. I’m focusing on my career, on finding a new apartment and planning a trip to Europe. And so dating has taken a back seat, which makes me feel a lot calmer, and helps me to feel a lot more in control.

So I’m starting to think that this is the way I’ll eventually break the cycle of deleting and redownloading dating apps. The interactions I’ve had on them have never been all that fulfilling, but I keep them on my phone as a sort of security blanket. When I feel concerned about my love prospects, it’s been a comfort to know that I can just pop open my phone and likely have a date lined up in an hour. But the more my life has filled up with other priorities, the less I’ve felt the compulsion to open Bumble and take a look around. I’m also not getting as bummed if something doesn’t work out because I know something else is around the corner. The fact that I’ve been able to keep my head above water while the rest of my life is swirling around me has shown me that I’m ok on my own and that there are things more important than finding love right now. Truly, it took my life being tossed into chaos to make me realize how unimportant the apps were to me at the moment. This moderation has bled into the rest of my life, too. I now stop my Netflix binges after a few hours, and I find myself spending less money on shit that I’d likely go crazy over before.

For now, though, the apps still stay on my phone. Just knowing they’re there is comfort enough, the same way that I know I can walk out of my apartment, head to the bar, and talk to a guy whenever I want. I may never break the cycle of downloading and deleting my dating apps — until I meet someone, of course. But in the meantime, I’m trying to fill my time with other priorities. Because dating shouldn’t be the main thing occupying my headspace. In fact, the only space these apps should be occupying is my home screen.

My Journey from Insecure Teenager to Aspiring Model