My Journey from Insecure Teenager to Aspiring Model | Milk Blog
Please click here for a note on our shipping.
Free Shipping on all $30+ orders. 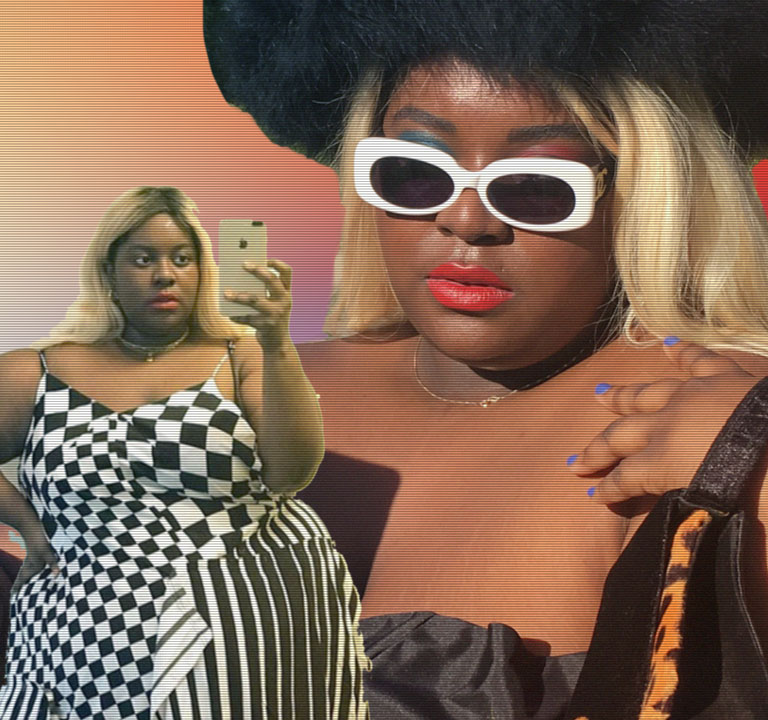 My Journey from Insecure Teenager to Aspiring Model

by La’Shaunae Steward, as told to Abby McIntosh

Fashion plays a really big role in how I express my personality now, but growing up in a close-minded area meant that it took a really long time for me to share my style publicly or on an open platform. I grew up in the south and never really had a lot of clothing or style options because I didn’t have money. My style experimentation started in 2009, when I was 13. It was a crazy year for me — the start of my teenage years — and it was the biggest year for me in terms of experimenting with my looks and style. After moving in with my mom, I changed schools and met a lot of new people and friends. But even with a new set of friends, I was scared of not fitting in. I watered myself down so much, because my “friends” would pick on me for having bad acne and acne scars, for being a size fourteen at thirteen years old, for my style choices, and for my taste. I actually tried really hard to fit in because I constantly felt like I didn’t belong anywhere, but I was so alone. Every day after school, I would go into my room and cry, or go to my mom and cry and tell her that I didn’t want go back to school. I would even avoid going out in public because I was super paranoid that everyone was judging me and talking about me. I would sit in the car [while my mom ran errands], and wouldn’t show any part of my skin because I was so terrified that people were staring at me.

During these years, my mom would sometimes reward me with a new t-shirt from Hot Topic or cute hair clips from Claire’s for doing housework or for doing well in school. I was so proud of the way I would dress and do my hair, but I would go to school the next day and get picked on for being an alternative, fat, black girl and for not looking like anyone else. There were small white girls wearing the same thing, but because I was black and fatter than them, I was the one who got told that I was disgusting or that I was trying to be something that I wasn’t. I would also get picked on for not wearing makeup, but I didn’t have the money for makeup. I felt like a monster. And you know how, in middle school, there was that one guy that all the girls would like and give attention to, but you never tried approaching him because of you were the center of the jokes? I was always told that guys wouldn’t be into me. I had a constant fear rejection. When my friends were around a group of guys, I would walk away and sit somewhere else because I was scared of the cute guys making fun of me for not looking like my friends. 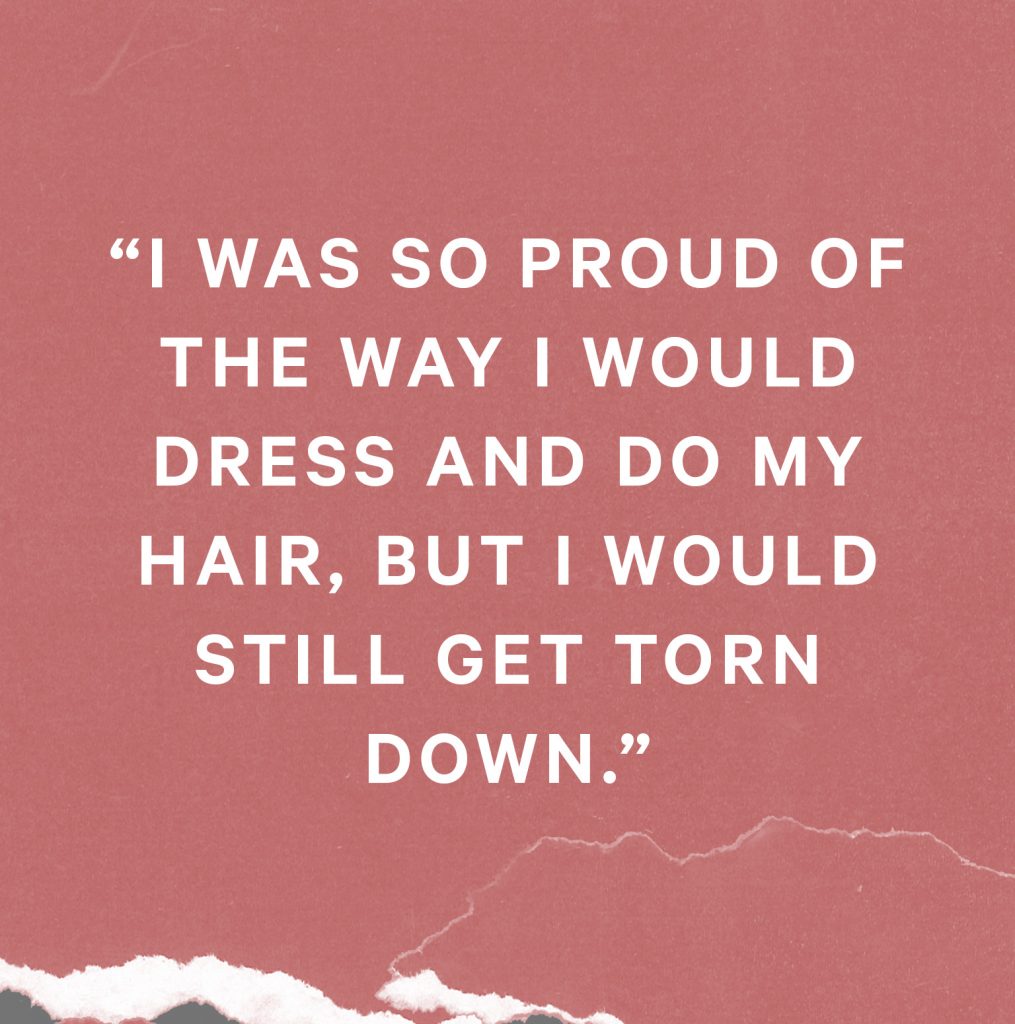 As I moved on to the 8th grade, I would sometimes slip notes to my crushes and have them awkwardly write back to me as we left school; the notes would simply say, in the ugliest writing, “I would never like you.” This was also the year when I was physically bullied. On one occasion, I even had a girl in my group of friends push me into the mud while everyone laughed. And when I rode the school bus, I would sit at the back of the bus with the older kids, looking down at my phone, trying to hide. But this group of guys would come up to me, harassing me and calling me names; they would videotape me and humiliate me almost daily. I was so insecure because of all of this, and I didn’t understand why or how I dealt with this every day. That was half of the eighth grade for me, and then, because of the bullying, my mom took me out of that school.

After doing homeschooling for a little while, I went back to a different public school to finish 8th grade. This new school was better because it was really small, and the kids knew that I’d previously been bullied, so they were a lot nicer to me. I finished 8th grade at that school, and then it was time for high school. I started listening to music during this period and that made me a lot happier. It was a lot of Tyler, the Creator — he was different and had his own style, which helped me find myself. I was 16 at this point: I had piercings that I’d given myself in my bathroom; I started dyeing my hair; and I discovered makeup, which consisted of me heavily powdering my face and using layers of bronzer on my cheeks. I did this every day and it was such a look to me. When it came to my style, Tumblr really helped me find my aesthetic. I searched for things that I liked style-wise, and I would make pieces by hand with whatever I had lying around the house. I learned how to be more creative with my outfits. I started experimenting with crop tops, too, but I didn’t get many chances to wear them because of the dress code. There were smaller girls wearing crop tops, but I was the only one who would get in trouble for it. I eventually stopped wearing them, but I got super into mixing textures and patterns. I was still being bullied: people were still telling me that I would never be good enough for anyone or anything, and I would still go home and cry; but I eventually became known for being creative and talented at drawing. People even started asking me where I shopped. I was still terrified of the older kids seeing me and judging me for my outfits and makeup, but I was overall much calmer than I had been in middle school, and I started to feel more comfortable with having fun with my looks.

When senior year came, in 2014, I’d started experimenting more with hair colors and skipping school to go to Tyler, the Creator’s carnivals in L.A, but I was still hiding from everyone at school and sitting alone. I had a group of friends that I would hang with, but they would only talk to me when there weren’t other people around. Dealing with this was hard, but it taught me that being alone isn’t as bad as people make it seem, and that it’s sometimes better to be alone than to be with people who make fun of you when you’re not around. I started doing more drawing and sketching, too, which helped me realize how major my style was and how major it would continue to be. I actually ended up winning best dressed my senior year, and I have no idea how, because usually no one really said anything about what I wore unless they were saying that nothing I wore matched. It was cool, though, because I knew at that moment that I would never again hold back from what I wanted to wear because of dress codes and my fear of being judged. Once I graduated and left school, I started to wear high waisted shorts, crop tops, leggings, and bralettes — things I’d always been terrified of wearing. It was at this time, in 2015, that I also started to grow my Instagram platform, but in 2017, I made one outfit choice — it was a Thrasher tee and a skirt that I’d made — that randomly got me turned into a popular Twitter meme because people were shocked that I had the guts to be fat and to wear a brand dominated by thin white guys. People were saying such mean things like, “Oh, her shirt is fake because Thrasher doesn’t make shirts bigger than an extra large.” I just thought, “Why are you harassing me and not other people who are wearing this brand? Like, why am I getting so much hate for that?”

I had a rough 2017 after that incident because my photo would get posted on hate threads all the time. I would get bullied, turned into memes daily — basically harassed just for existing. I would also get told, because I look the way I do, that I was gonna die before I hit a certain age, but newsflash: JUST BECAUSE SOMEONE IS FAT, DOESN’T MEAN THAT THEY HAVE HORRIBLE HEALTH ISSUES! Going through all of this online last year was what made me discover my majorness, though. I learned my worth from everything that happened to me in 2017, including companies using me for their own gain and then treating me like I was disposable and not worth being compensated. I also learned how annoying I can be, too, when I would try to reach out to the same companies over and over again, even after being rejected, because I loved them. You cannot force people to care. 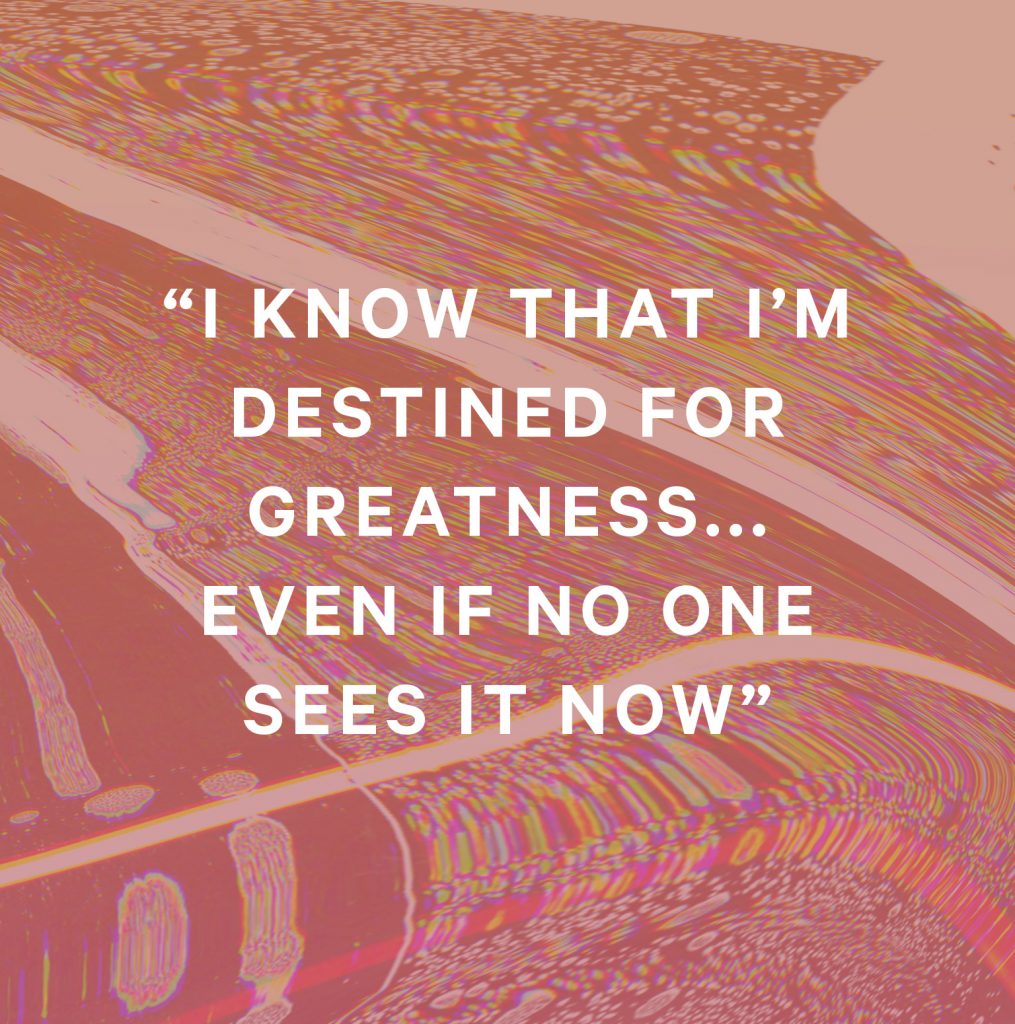 Throughout last year, I also applied to a ton of [modeling] agencies but never heard back. When I finally heard back from an agency, they told me I was too short. I’m still trying to break into this industry, even though I say to myself all the time that I want to give up. I’m bigger than a size 18 and I’m only 5’3”, so it’s hard to constantly get turned down and to always be told that you can’t make a living doing what you love. It’s also hard to watch other people get amazing opportunities while I keep getting rejected. But something is telling me not to give up. I want my dreams to be a reality. I want everything that I’ve been working for to work out, and to not be kept out of the spotlight. Girls like me are trying so hard and aren’t getting anything in return because of how we look, but I know that I’m destined for greatness. Even if no one sees it now, I’m hoping that someone sees it in me soon.