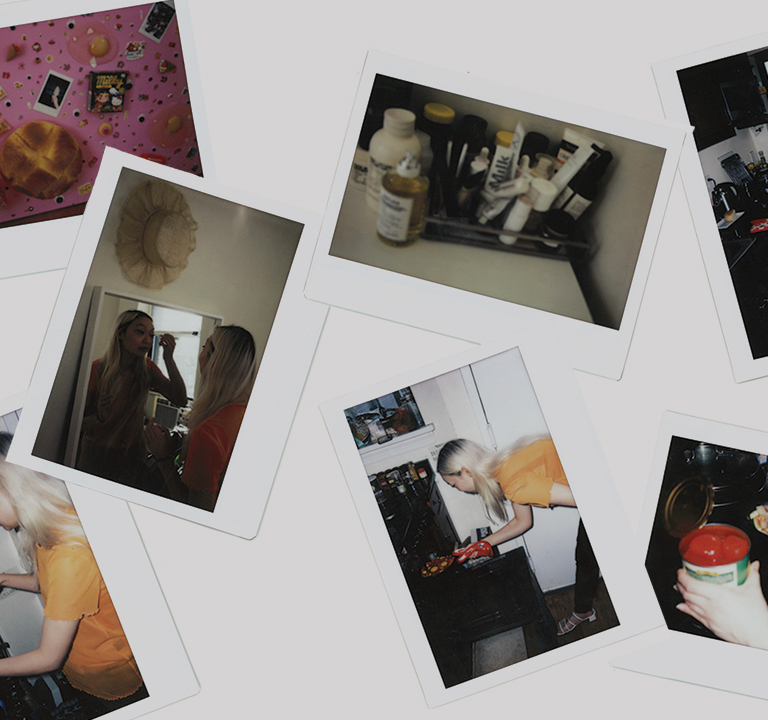 Instagram has a funny way of bringing people together. In this case, I met Jessica, a stylist and producer, at a NYFW party. A few margaritas deep, I confessed to her that she’d been my girl crush ever since I started following her on social media (haven’t we all been there?), and we shortly became #IRL friends. Her Instagram is a mix of fashion, design and the occasional MTA-rant. She’s got the face of an angel and the personality to match.

On a Friday morning in her apartment on the Upper West Side, Jessica made me homemade shakshuka and baba ganoush while we talked about her signature cat eye, the fashion industry and her mouth-watering food account @therealjessicawu.

What brought you to NY?

I attended fashion school at FIT where I majored in advertising and marketing.

How did you start styling?

I started styling my freshman year. I wanted to do something outside of academics because I felt like the clubs at school were lame. I had a few connections because I had a blog back in California. One of them was this photographer who one day was like, “Hey, I know that you have cool clothes because we follow each other’s blogs, so is it ok if I borrow some of your stuff, because I am shooting a test for an agency?” So I lent her my clothes, and the next day she said to me, “I think you should start putting things together for me, because the agency really liked it.” It happened super organically. It just started as me putting outfits together, and at first, it was from all from my own closet, but then I began going after younger designers who were eager to show their stuff.

Are you still into finding new designers?

Definitely. I would say most of my pulls from the shoots that I do are still from new designers. It’s really great for me to do something for them, but also for the industry. Right now, I love Pulp Studios, Oht, and I’m currently working on launching Peter Do; they’re all local New York designers who are on the up! I also love shopping at the stores I work with — The Frankie Shop, Maimoun , and Either And  are all also based in NYC.

Why is working with new designers important to you?

It’s important to me because I feel like that’s where everyone started. Why not give young designers the same opportunity? I feel like, sometimes, or most of the time, fashion is elitist. Which is ironic because the industry thrives on youth, newness, and novelty.

I want to to talk to you about your Instagram and being open about your health issues on it. Why is that important to you?

In the last year, I’ve had recurring menstrual issues, specifically nonstop and irregular bleeding for several months straight. I’ve become increasingly vocal about it on Instagram for several reasons.

1.) I’m unfortunately a complainer and just need an outlet to vent about my discomfort (lol).

2.) The more I post about my personal health issues, the more I realize that it’s not a purely personal or unique health problem to myself — so many women across the world share the same problems with their periods!

3.) The amount of responses I get from women who are going through the same thing, offering me advice, or sharing empathy with me is really unbelievable, in an amazing way. Whether it’s young girls or even women who have children, the fact that something previously and even currently considered a taboo subject is opening up the conversation about our bodies is so important. If you had asked me two years ago (because I was having this problem even then), I don’t think I could have said the same thing. I was crying myself to sleep under the covers, and no one knew about it. It was exhausting to go through something like that alone.

You definitely have a signature look. What are some of your favorite beauty products?

Skincare is important to me. I’m starting to realize that less is more. I have a lot of products, but I use them for different things and not all at the same time. My nighttime routine is cleanser, exfoliator three times a week, then serum, and moisturizer, and that’s it. I used to have a laundry list skincare routine, but now it’s super simplified to my favorite products that all do the job. I use Whalmyung’s Skin Elixir as a sort of toner, then Drunk Elephant’s C-Firma serum, and Dr. Jart’s Water Drop, a hydrating moisturizer. My morning routine begins with the same base, but I also use Neutrogena Ultra Sheer Clear Face sunscreen, Nars primer, and then CLE Cosmetics CCC cream. I also love Le Labo’s charcoal face mask and CLE Cosmetic’s Oxygen Foaming Cleanser.

What about your signature cat eye? When did that start and what inspired you to do that?

I don’t know what exactly inspired me to do that, but I do remember my first fashion inspiration was reading my aunt’s Vogue in around 2006. The content was super editorial and over-the-top, and it made me want to stand out in some way, because I am from a sleepy beach town where people wear boy shorts and flip flops, so I was like, why don’t I just change up my look, too. I use NYX’s liquid liner as a base, and recently I’ve been adding the Milk Makeup Eye Vinyl in Iridescent Lilac and Ubame Mascara to finish!

Any tips you can share for how to make your signature cat eye?

I always start with the bottom of the wing on the outer eye, and fill in the tip of the wing towards the middle of the eye, gradually thinning the line. I like a sleeker cat eye and prefer to have less liner on.

What inspires you? Where do you find inspiration?

I am inspired by the people I hang out with. I love being around creative people who know what they want in life and even if they don’t know exactly what they want, they are motivated every day to get to the point where they can achieve what they want. I love to meet people who are willing to work with each other and collaborate.

Tell me about your love for cooking, when did it start and how did it began?

I was never really big on cooking until I moved away for school. My mom is an amazing cook, so I compete with her in the kitchen! When I first moved to New York, I was lucky enough to have a kitchen in my dorm, and I was like, “I’m not gonna eat this nasty dorm food, I’m gonna cook my own stuff,” and that really allowed me to explore what I could do. I also love hosting and cooking for people.

How do you find new restaurants?

I love going on Yelp. Yelp is what I do in my free time; it’s really embarrassing.

Do you have a new favorite?

There is this really good place in my neighborhood called Flor De Mayo. It’s the product of immigration in the ‘60s — a mix of South American and Latin American cuisine. It’s really good oily, comfort home food. They do this thing called Lomo Saltado. It’s basically steak mixed with fries and cilantro rice and corn…it’s so, so good.

What advice would you give to anyone who is new to cooking?

There are so many websites out there that have really simple recipes, and from there you can start figuring out what you like and what flavors profiles you’re into that sort of work together, and then you just create stuff.

I have a few favorite food blogs I follow; there is this one called @smittenkitchen she is from New York and she has several cookbooks, and then there is one called @minimalistbaker, and that one is actually more vegan, gluten free, and health conscious stuff, but everything she makes looks delicious and not vegan, and also @sproutedkitchen.

What is your idea of a perfect evening?

Obviously something that involves food. [laughs]

Do you like New York? Do you want to stay here?

I love New York. I definitely want to stay here. I don’t think LA would suffice for me. LA has its own creative industry, but i feel like the NY industry is the one I identify with the most.

Why Model Cassey Chanel Opened Up About Having Alopecia