This Music Video Is a Pink + Purple Ode to Self-love (and Lip Gloss) | Milk Blog
Need help? Hit up our Milk Makeup experts at advice@milkmakeup.com
Please click here for a note on our shipping.
Free Shipping on all $30+ orders. 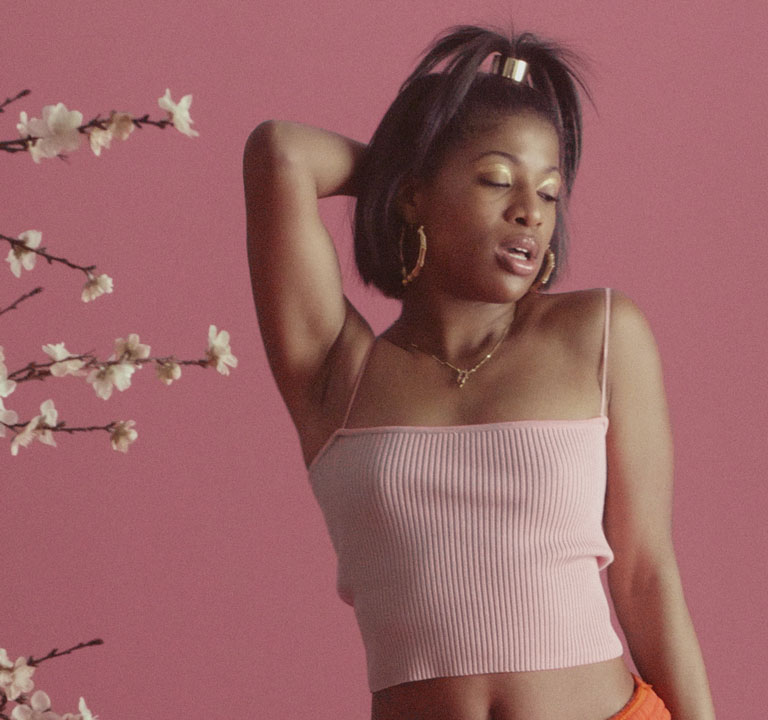 Self-love is a hot topic but is not always a simple concept to put into practice. It can appear easy to achieve when scrolling through inspirational/aspirational posts on social media, but for a lot of us, the self-comparison can start to creep in, and self-encouragement can feel harder to implement. We sat down with 25-year-old, NYC-based soulful artist, Courtnie, to hear about her personal journey to self-love, how she learned to let go of comparison, and how she realized that the most important person to be infatuated with is yourself. Although she admits that the journey to self-love is always a work in progress, she let us in on how she handles those moments of self-doubt like a boss through positive affirmation, monitoring what she digests on the internet, and reminding herself to be more careful about the people she surrounds herself with.

We also spoke about her new song and video, “Mesmerized,” which is an ode to how far she’s come in loving the woman she is today. The song comments on the unhealthy act of being obsessed with a romantic interest, and how embracing your own unique beauty is where the true magic lies. Throughout the video, Courtnie exudes the confidence of an ’80s diva in bold pinks, lavenders, and funky yellow eyeshadows. She also reclaims her power through intriguing lyrics like, “I like when you watch me”.

Courtnie, who got her beginning as a church vocalist, has spent her 20s growing into a truly sultry and glamorous singer/songwriter. For a little inspiration as you continue on your path to self-love, watch the “Mesmerized” video below and read on to find out how she found her own sound in college, why collaboration is important to her, and the inspiration behind the incredible beauty looks in her new video.

Milk Makeup: The beauty looks are amazing in the Mesmerized video, from the makeup to the hairstyles. Would you say there were specific people you were drawing inspiration from for the video? If not, who are your beauty inspirations in general?
Courtnie: I wouldn’t say I was drawing inspiration from anyone in particular; the goal was to be original! But Marisa Truitt — who is based in Chicago, by way of NYC — as wonderful as she is as a director, is an incredible stylist as well. We work really well together. So weeks in advance, we tag-teamed to come up with makeup and hair looks and let the makeup artist, Mimi Quiquine, and hairstylist, Brittany Gay-Taplin, take it from there.

Overall, I wanted to give the style crew space to create freely and use me as a blank canvas. In terms of people whose beauty and style inspire me in general, I’d have to say Rihanna and Solange. I don’t know if there are any other specific people I pull from, but I just love being unconventional and innovative. I love anything bright and vibrant. For the opening scene of the video, I had an untraditional yellow eyeliner, and I’m also obsessed with the glossed lid I have toward the end.

MMU: It’s amazing that you work with a predominantly black, female crew. What inspires you to do so?
C: First of all, black women are amazing. So it’s, like, a no-brainer that I go out of my way to work with them. Second, I think it’s important to be intentional. I want to change the conversation around nepotism and emphasize that there’s nothing wrong with choosing each other on purpose. I know that to be in charge of who’s on set is a privilege, and I don’t want it to be haphazard. 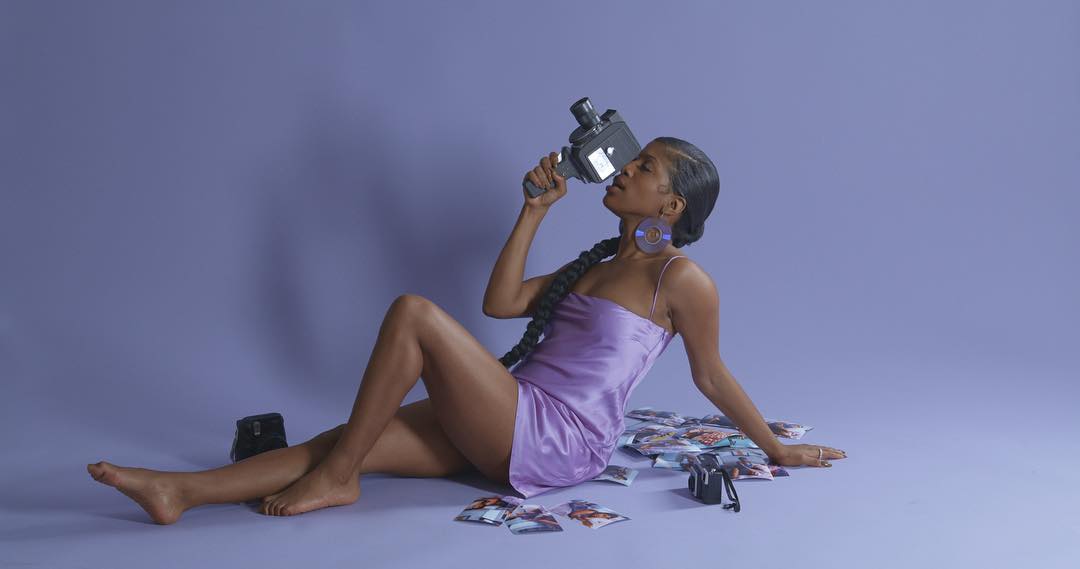 MMU: You were born in Oakland, lived in Chicago for a while, and then St. Louis. How do you feel your upbringing has influenced your artistic style?
C: I grew up listening to V103 in Chicago and 95.5 in St. Louis and I can honestly say that type of radio is unmatched in other cities. The Midwest has something special. My soulfulness comes from there and I take pride in my roots because of that.

MMU: Who would you say are your vocal inspirations?
C: Always a difficult question because there are so many. But starting out, I used to say Erykah Badu, Sade, and Nina Simone. My general entertainer idols are Beyoncé, Michael Jackson, Solange. Whenever I’m singing something upbeat, I feel like I move like Janelle Monae.

MMU: I love the color scheme in the video. Did you have a lot of say in that direction?
C: Definitely. Marisa will tell you I was super keen on pink and purple hues. When I’m writing and dealing with music and sound, I often think in colors. And this song just felt like purple and pink. It feels sensual. And when I think of self-infatuation, I think of pink. I wanted that soft, glowy ‘80s feel to it. I want to make people feel themselves more when they watch this.

MMU: Mesmerized is all about self-love and self-infatuation. What was your journey to that space of self-love?
C:  My self-love journey is always in progress, and ever-evolving. I think the main thing that’s helped me is truly just thinking good thoughts. Affirmations are real and they work in negative ways just as they do positive. So I realized for years and years I’d been conditioned to second-guess myself in one way or another, to consider every possible negative outcome, to strive for an accolade or some physical trait I don’t actually care about or want, and finally, I just hit my breaking point. By no means is this my first or final breaking point, because we always have room to grow when it comes to our psyche. But I’m proud of the way I’ve altered my thinking, the way I filter what I allow into my life via social media and the internet in general, and the way I’m super intentional with the people I surround myself with. All of those things have played into me being able to set my ego aside and be more radiant by the day.

I’m finally at a good point, after 3-4 years of making music. I think I had a super strong identity in college. I didn’t start making music until the end of college, and it’s something I never thought I would do. I never made music before that. I liked to sing in the shower, that was it. Embarking on that new career journey in the arts was really strange for me and I feel like my security went out the window. So, for the last few years, everything I created was all about what I aspired to be. I was trying to be all these people that I wasn’t. I had the mentality that, ‘if I just do what she did, I’ll be where she is.’ I will say that this project, what I’m creating now, has definitely been more about who I am right now. This is the first time I started to write about who I am currently, and I’m really proud of that. I’m obviously still becoming the person I’m meant to be. But this is definitely an example of me coming into myself fully and unapologetically. 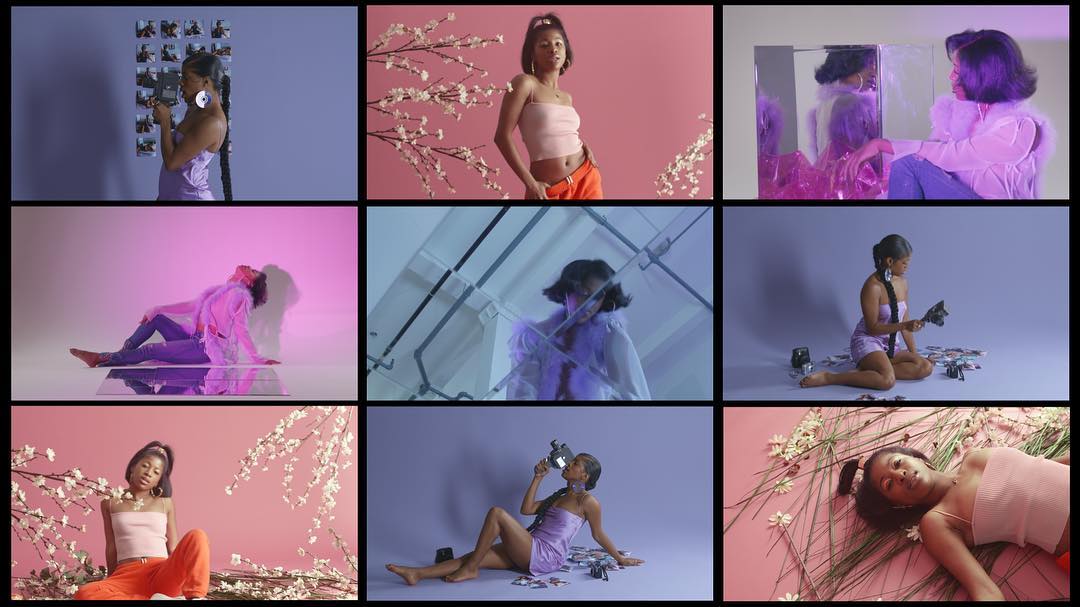 MMU: What’s your advice to young girls trying to begin their journey of self-love?
C: Everyone I looked up to would always tell me to not try and be anyone else. No one can do you better than yourself. It’s so cliche but it’s actually hard to put into practice. I would really emphasize that you have to trust your gut. You’re not going to do Oprah better than Oprah. But, you can make a profit from being yourself. There comes a point where you don’t have a choice to be anything else.

MMU: In the video, you’re using super 8 cameras at some points and you’re playing around with different artistic mediums. Would you say you dabble in other arts outside of music?
C: I am very into film, but technically I don’t know much. Luckily, my friends know what they’re doing. I appreciate looking at it and curating visuals. I was obsessed a few years ago with the idea of doing everything. Producing my videos, directing them, styling, etc. It was all just going to be me, me, me. And I think something I learned is that there’s often someone out there who can help you to kill it even better than you can, and collaboration breeds original ideas.

MMU: What are your goals for the video and song and for yourself as an artist in the coming years?
C:  Mesmerized is about that feeling of being completely entranced with someone, to the point that nothing else matters. At one point in the song I sat: ‘Starved when I’m not eating from the palm of your hand.’ And that pretty much embodies the feeling I’m trying to convey throughout the track. But because sometimes being obsessed with someone else can be unhealthy, we decided to flip the script for the visual and make it so I’m hypnotized by my own actions, pampering myself instead of someone else, etc. I proceed to say: “I like when you watch me,” and I love that line because it can be applied to either situation, whether it be about another person or you taking in your own exquisiteness, in a giant mirror [laughs]. I think even just listening to the song, I hope people will come up with a detailed, sensual visual in their heads to empower themselves. But I’m just excited to show the world what I was visualizing when I wrote it! And my main goal is that people will like it.

My goal as an artist is to just have more ears and eyes, to be honest. I don’t want to have to fight for exposure. I want to get to the point where I’m just creating freely, and people will hear it. I want to get to the point where people are so interested in me that they are just anxiously waiting to hear me. I want to work with new instrumentalists and stay inspired and keep wanting to create. I would love to collaborate with people from home, like Smino (from St. Louis). I’m trying to be on my Drake and work with Michael Jackson [laughs]. I’d love to write with Solange. Saint Heron has been ridiculously supportive of me since the beginning and would love to just continue working with them. Would also love to work with Doja Cat. She’s always promoting my music and I’d love to collaborate with her because she’s talented and clearly supports other women in the industry.

MMU: We are so inspired by your looks in mesmerized and we want to know, what beauty items do you always take with you wherever you go?
C: You can catch me with a bomb highlight. You can also catch me in my favorite brown lip liner with gloss. I love bringing attention to my lips as a black woman. And I always have to have my nails done.

How I Finally Found the Perfect Routine for My Oily Skin

People Are Freezing Their Faces for Good Skin