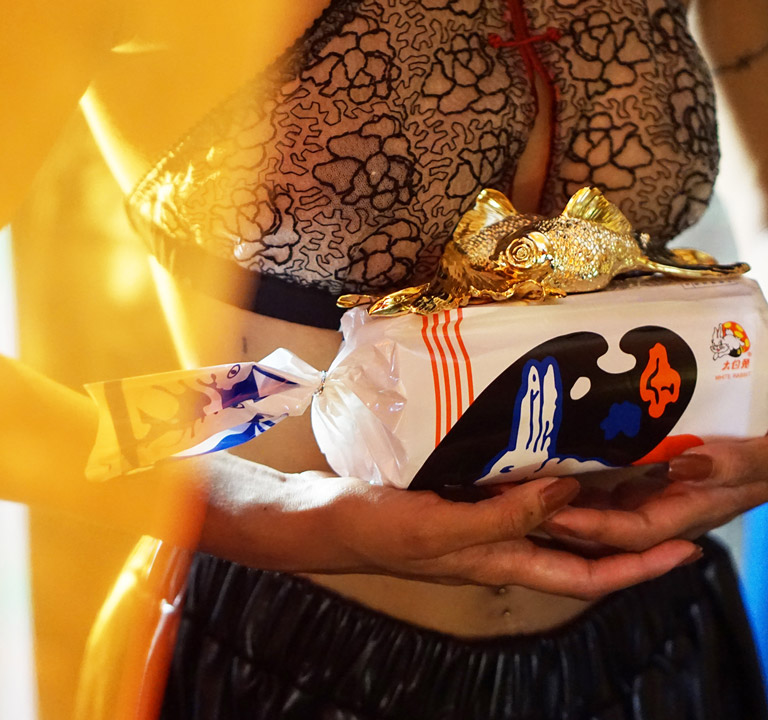 Membership to the Chop Suey Club doesn’t require anything but curiosity. Curating cool, edgy, and culturally significant art from both global and local contemporary Chinese artists and designers, Chop Suey Club is a modern design store located on the corner of Hester and Orchard Street in NYC that carries a wide variety of items ranging from eyewear, to lingerie, to lamps, and end tables. Ruoyi Jiang, a Beijing transplant, established the shop two years ago after realizing, as she hunted for apartment decor, that there was a lack of attention given to aesthetically interesting, new Chinese design and art in the US. For Ruoyi, Chop Suey Club is not just a boutique — it’s a curatorial space that introduces contemporary, modern Chinese art to a wider audience and bridges Chinese and American culture together to create a dynamic and unique perspective. I got to chat with Ruoyi real quick about Chop Suey Club, xenophobia, and China’s modern art scene.

Milk Makeup: How did the concept of Chop Suey Club start? What inspired you to open up Chop Suey Club?
Ruoyi Jiang: The shop has been around for two years but it started after I graduated from NYU for photography. I had worked at an architecture firm and for a private photo collector. Both of these jobs then exposed me to the design and art world. Coincidentally, these two jobs were very active in Chinese designing/art communities and it was really interesting to be able to see that. I had just moved to a new apartment at the time and was looking to decorate the apartment, but trying to find something different that also reflected my cultural heritage while being modern was very difficult. As I looked more into it, I started to see a lot more really interesting Chinese designers across fashion and other industries. 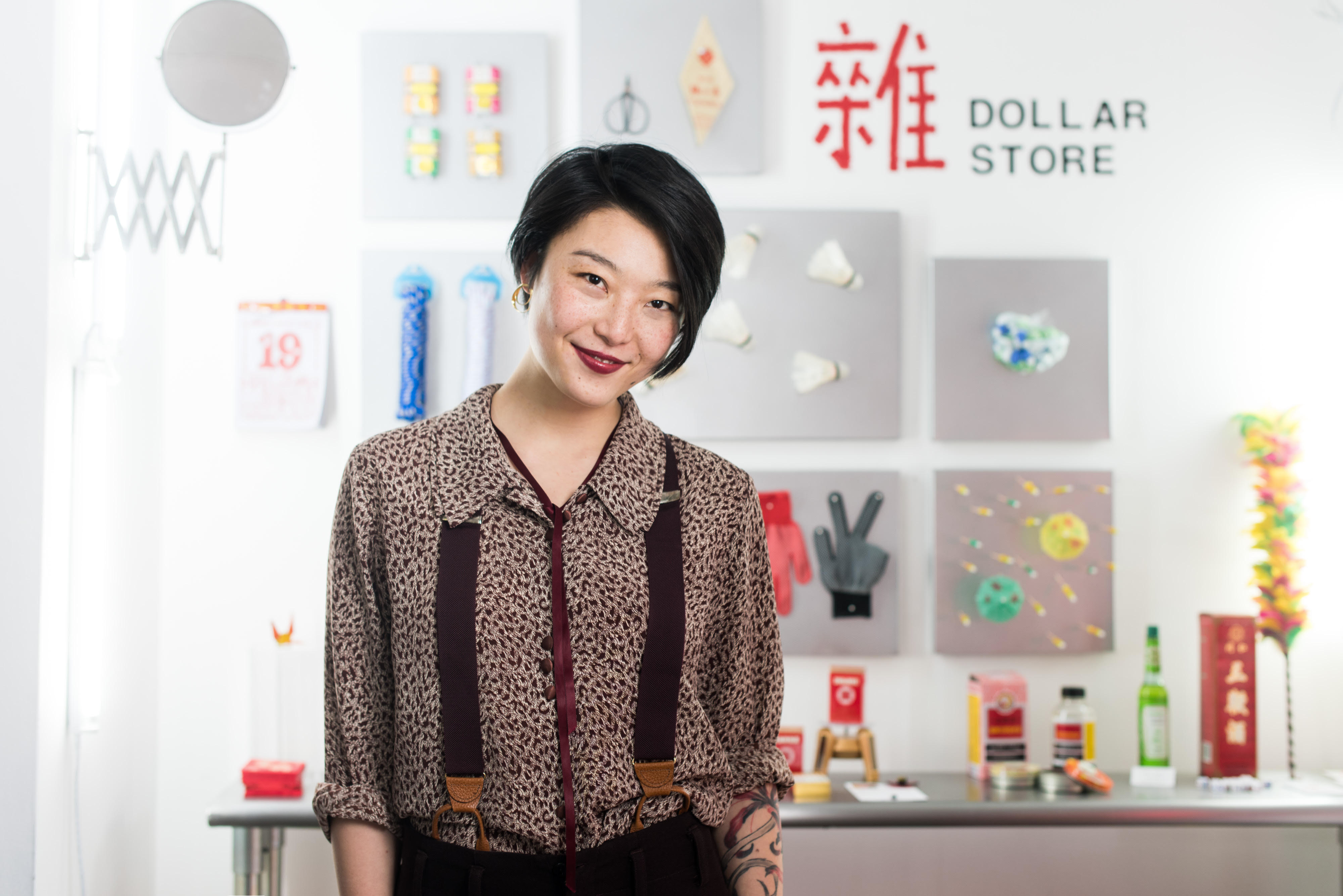 MMU: What’s the story behind the name?
Ruoyi: I first saw the name on a Bruce Webber photobook and thought it was funny; it reminded me of Joy Luck Club. Later I learned that Chop Suey was the first Chinese dish invented to cater the American palate. It then became eponymous with “Chinese food” in America. Back in the ’30s, our neighborhood was full of chop suey restaurants. Later on, when more and better Chinese dishes became well known, chop suey began to fade out. To me, chop suey and Chinese American food in general are significant symbols of cultural integration and acceptance.

MMU: Have you found a community of like-minded people who share the same values and ethos?
Ruoyi: We’re actually very lucky to have a very supportive landlord. I feel like that’s not very common. She’s a Chinese-American lady herself and she really likes what I’m doing. She kind of placed her hopes in me and from that, I feel strangely supported by my landlord. That gave me a sense of how a community can be really tight and help each other out, and we’ve actually gathered a nice, big community. Our customer base is not just Chinese or Asian, it’s pretty diverse. Everyone finds something interesting here, but our Asian community, in particular, is very supportive. A lot of Chinese people come over and feel very proud that someone is doing this and get excited about seeing a lot of things they haven’t really seen — they’re like, “Oh my god, I had no idea there’s so much happening and we have so much good stuff going on.” We even have Chinese people abroad who travel to see our store. 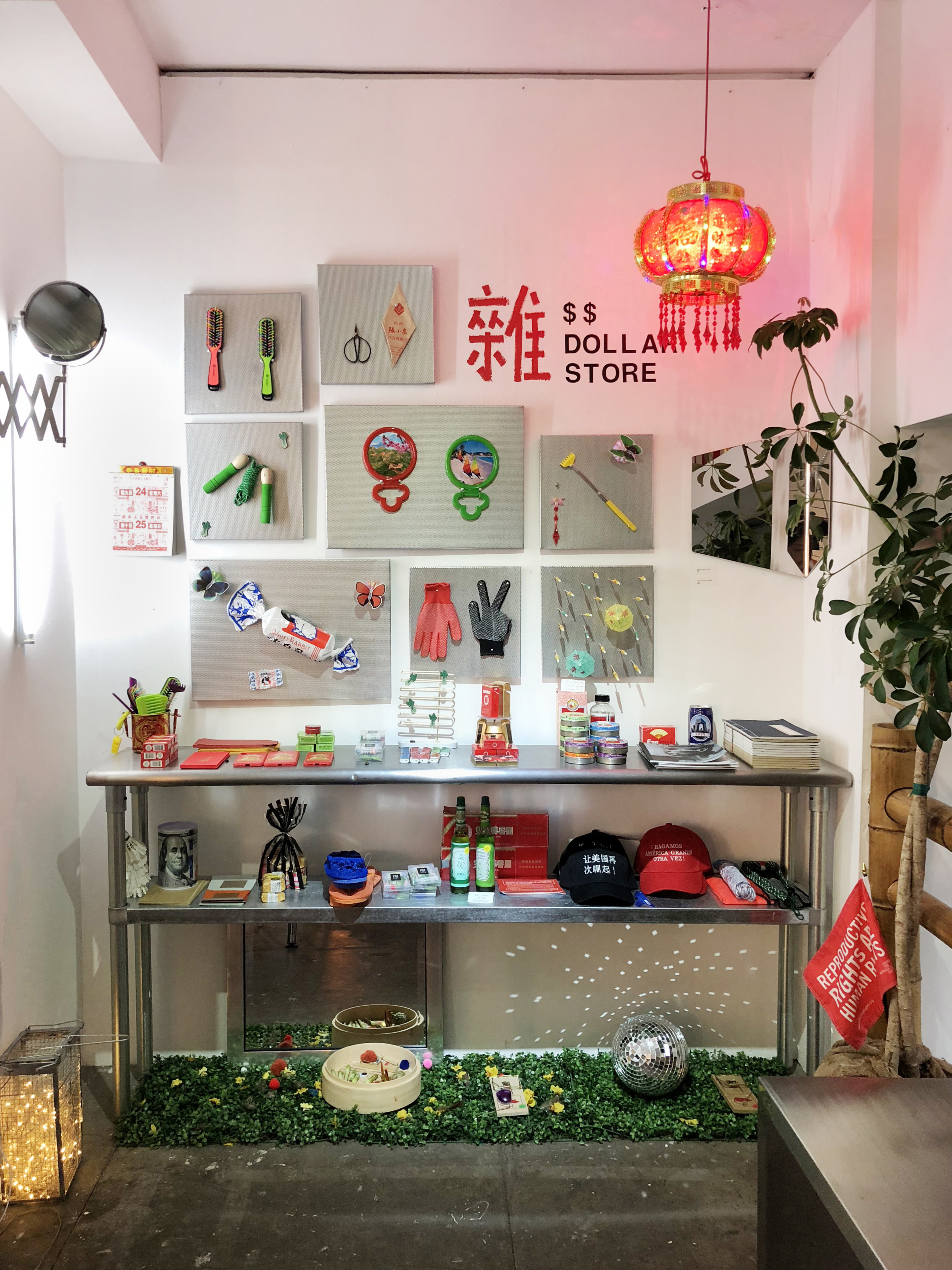 MMU: On your website, it says, “We believe the best way to dissipate xenophobia is to make your culture accessible to others. Chop Suey Club is an effort to open up contemporary Chinese culture to a larger audience.” Can you talk about that? Specifically how you personally see xenophobia manifest and what other ways do you believe this channel between cultures can be opened up?
Ruoyi: Well, through my personal experience and my studies, I found that it’s very natural for people to fear what’s foreign and alien to them. A lot of times, the best way to really dissolve that fear or prejudice is to make a friend from that culture. And then almost instantly, that world and that culture become less foreign to you; you kind of get the idea that they are people like you. And I think a lot of times there are cultural sentiments or anecdotes that people don’t really understand because no one had ever told them anything about it. I feel I am able to communicate with a different understanding of American culture and Chinese culture and am able to kind of bridge it.

MMU: What is something about Chinese culture that you feel like people should know about and may not?
Ruoyi: Well, there were a few things. Like for example, a lot of people think that Chinese people are fairly rude because when they go to the restaurants or other places, there is basically no customer service. You’re just kind of being yelled at all the time. But if you just keep on smiling at them, eventually they will melt and smile back at you. It’s just a front because they’re all really, really nice inside. I’ve had a lot of friends who tried that and it really worked. Also, I feel like Chinese people are some of the funniest people I’ve ever met. A lot of people don’t really get a chance to see that. 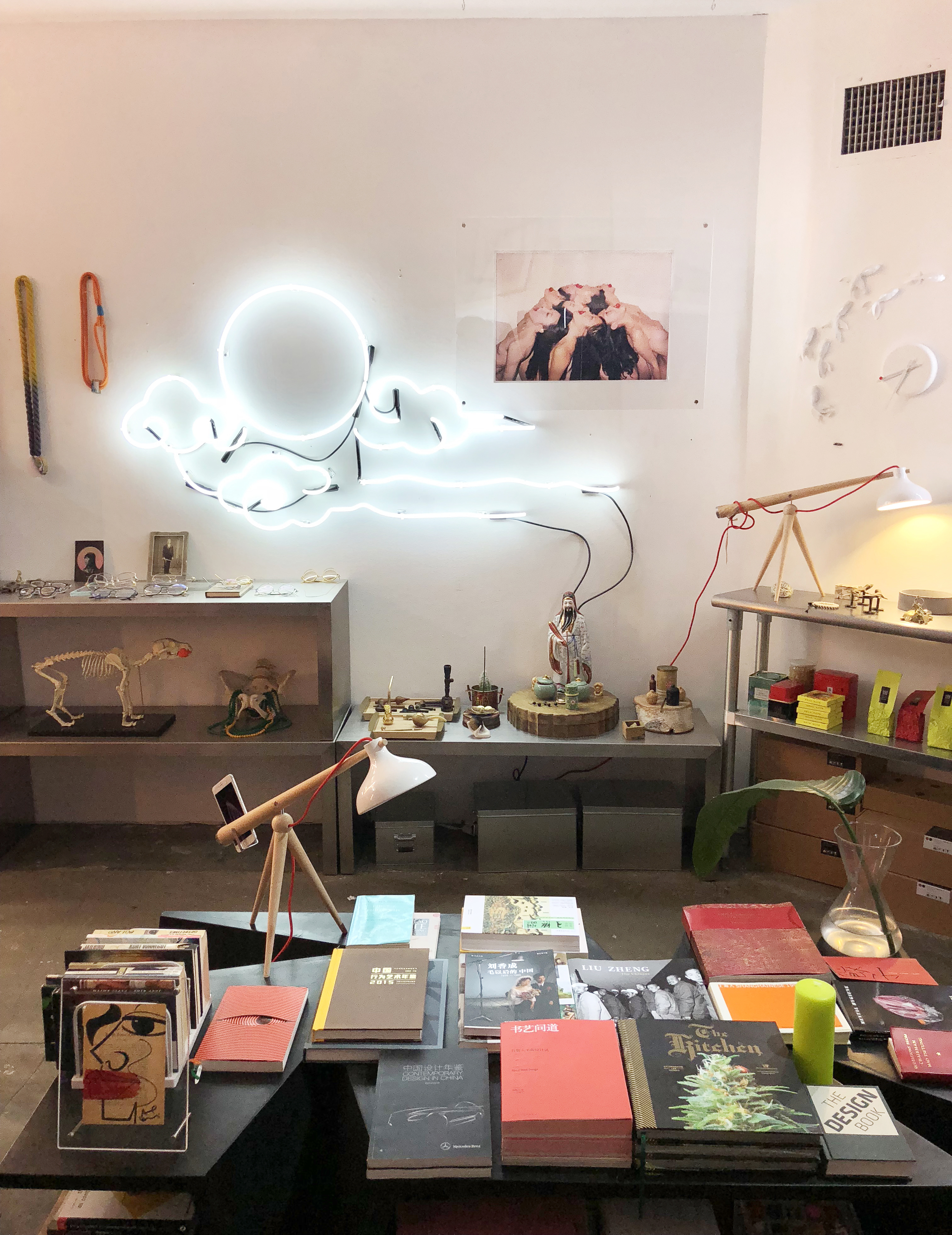 MMU: On your Instagram and on your website, you feature a lot of Ren Hang. Who are some of your favorite Chinese artists or creators right now? Or Chinese artists that you feel are influential in Chinese design and culture?
Ruoyi: Ren Hang definitely, although sadly he passed away recently. Others, they’re not really famous anywhere else, but I’m mostly looking at a lot of designers, like book designers. There’s this very masterful book designer, his name is Lu Jing Ren and he’s just incredible. Sun Yuan & Peng Yu, Huang Yong Ping, and Wang Rui Lin are among some of my favorites as well.

MMU: What is your process for finding and choosing the people you showcase?
Ruoyi: Well, I browse the internet intensely. I’m trying not to focus too much on fashion because it’s difficult to move the inventory, but we’re getting a lot more accessories and our primary focus for fashion is on eyewear and jewelry. People like Percy Lau and Ejing Zhang, they’re pretty famous in their own circles already. So there was no problem with finding them.

I just try to find things that will fit into an urban lifestyle, so that I feel like I can see myself using it. I’m just purely picking them from a personal POV. Also, if someone creates something that touches upon something quintessential in Chinese culture, then I’m very happy to sell that as well. Like this cigarette book we sell by a French guy who collects abandoned photographs of smoking games at Chinese weddings is really inspiring to me. I’m like, “Oh yeah! Every Chinese wedding I’ve been to is like that.” You get to see from a foreigner’s perspective how this all seems and it really helps us to figure out what is really valuable. I feel that this shop is more of a study for me to see which things I have strong responses to and what other people respond to as well. 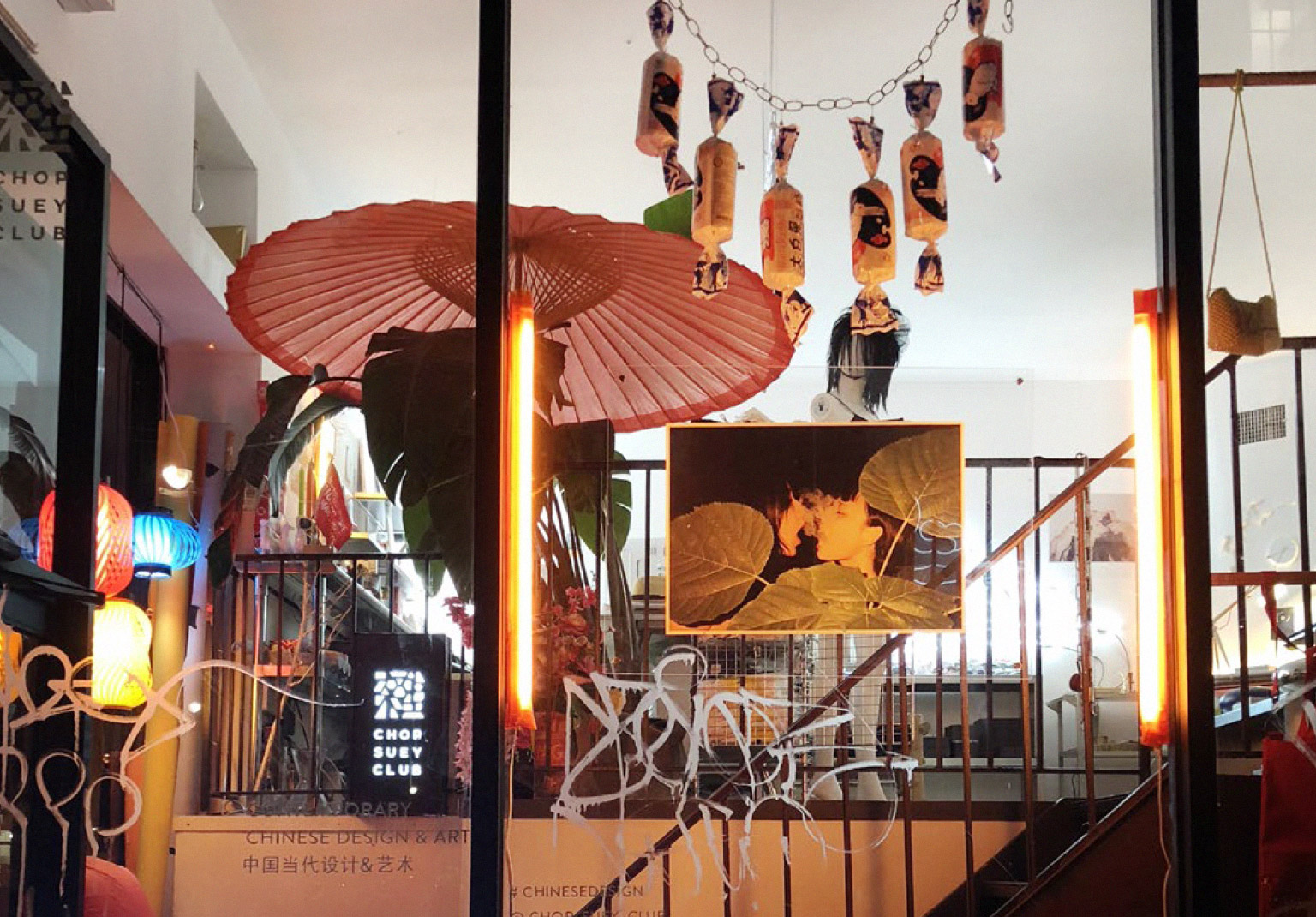 MMU: Do you notice things about contemporary Chinese art like reoccurring patterns or themes they’re trying to deal with? Especially with the current economic and sociopolitical landscape?
Ruoyi: The last Guggenheim show, called “Theater of the World,” was a retrospective of Contemporary Chinese art and they featured a lot of important pieces from pretty famous Chinese artists. I heard a lot of people say they didn’t understand it at all, that they didn’t recognize what any of it means.

When I saw those artworks myself, just the description itself was a full page long and even that wasn’t enough background to explain what was really going on. So I think a lot of the art was fairly difficult even for a Chinese person to understand. I think it’ll be extra hard for foreigners to understand without knowing anything about history because modern Chinese political history is so deeply ingrained in all contemporary Chinese art, and the reason why Chinese art is so obscure is because of the censorship. They can’t do anything visually. I think that created a lot of inherent difficulties for contemporary Chinese art. A lot of the artists who have gained fame internationally is mostly because on top of their visuals, their content or their theme is easier to explain. I think the best thing to do, really, is to just keep on observing. We see a lot of good movement design-wise. I see a lot of young people who are now like, “You know what, we’ve had enough of these shitty industrial things. Now let’s really do something.” 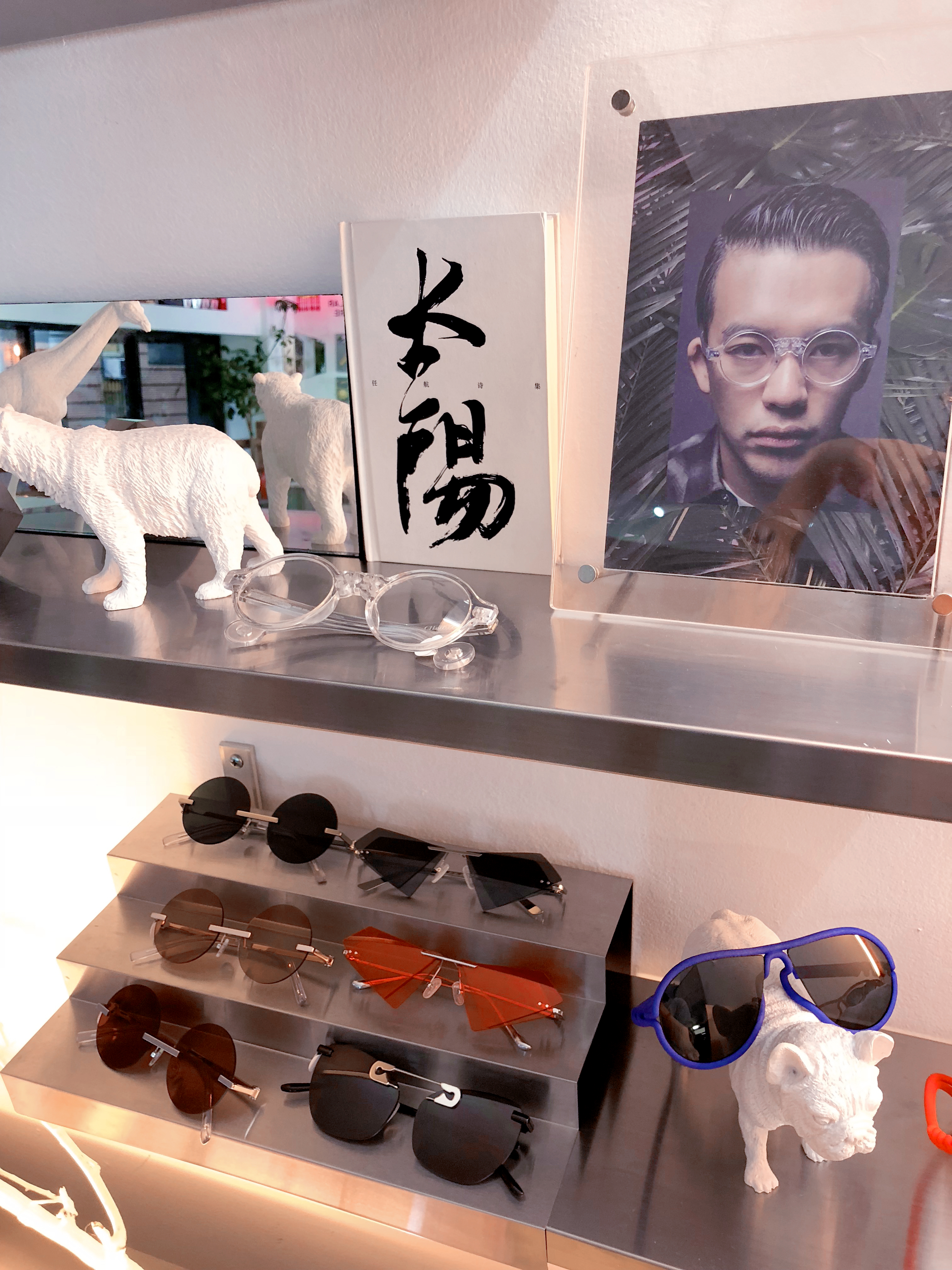 MMU: What are your hopes then, for Chop Suey Club? Where do you want to take it in the future?
Ruoyi: My hope is…well, I have different hopes. Business-wise, I’m hoping to expand into consulting. Basically, we want to help different brands and companies curate gifts and produce merchandise. The shop itself will basically be our showroom. What I really want to do this year is push a lot of home decor and furniture. Our logo is a Chinese character, and it’s pronounced “zha.” It just means variety, like it’s the same word variety stores use. So, it’s our intention to keep Chop Suey Club a general store, not really confined to any styles. It’s ultimately lifestyle. We have a small collection of smoke wear, although it’s not online, and we want to push more tea. Another sector we want to push is books. Furniture and lifestyle are very important categories for me to push because I think it’s only through living a certain lifestyle you can get a better idea of certain cultures and really accept it and explore it.

MMU: Anything cool coming up for the store?
Ruoyi: Actually, we’re coming out with a new product! It’s a Monopoly game of Chinatown.

Why Having a Finsta Might Be a Really Bad Idea