The BTS Phenomenon: From A Korean-American’s Perspective | Milk Blog
Please click here for a note on our shipping.
Free Shipping on all $30+ orders. 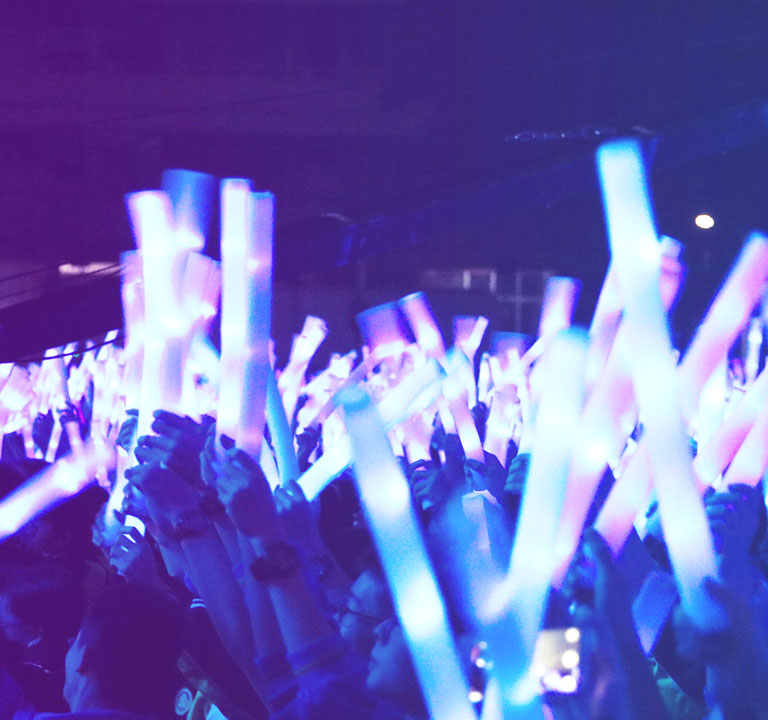 The BTS Phenomenon: From A Korean-American’s Perspective

BTS, or Bangtan Sonyeondan (which translates to “Bulletproof Boy Scouts”), is the current musical act of the moment in the known universe, and if you haven’t heard of them by this point…I’m not sure what to tell you.

But if you do know of them, maybe you sighed at the realization that you’re about to read yet another article written about this K-Pop phenomenon. And while yes, there here have been many articles about how the influx of K-Pop feels from the perspective of the consuming foreigner, there haven’t been enough from the perspective of a Korean-American.

Since their skyrocket to international fame, BTS has become unavoidable, and every inch of their existence has been inspected — from their singing and dancing to their skincare routines and makeup looks. This growing interest and coverage have consequently led to a deeper, continued interest in the wider music genre that is K-Pop, as well as South Korean (hereafter Korean) culture in general. 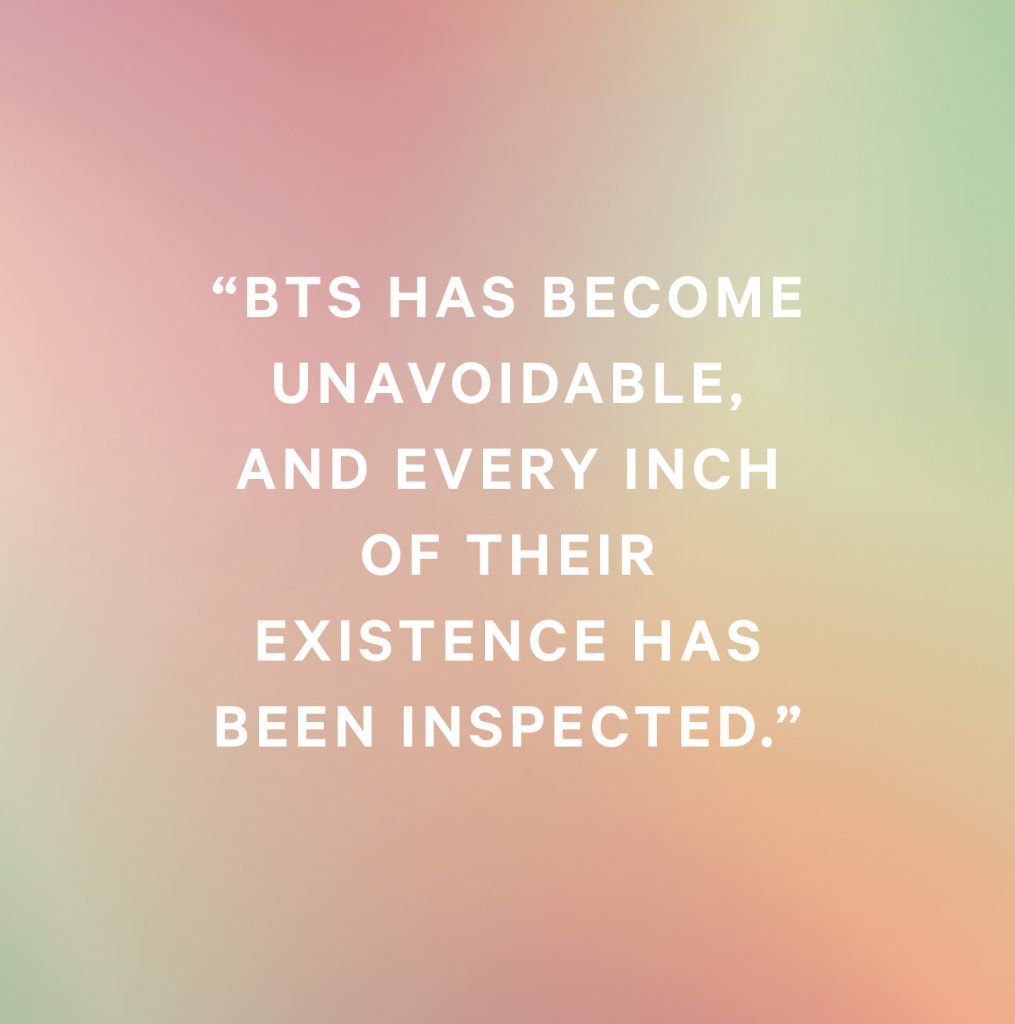 For the most part, I think it’s great. It’s surreal to watch BTS reach so many different kinds of audiences, to see red carpet photos of them at major music award shows as the handsome, well-dressed figures of Asian representation, and, overall, to be able to witness more and more people become interested in my mother culture. At the same time, the way BTS has been received by the whole world, and more specifically America, has been equal parts amazing and frustrating for me.

Despite these mixed emotions about their fame, one thing’s for sure — they’re everywhere. When I traveled to Bermuda this past April, I was surprised to hear a couple Bermudian students on a bus ride home talk about RM, JungKook, and Jimin — some members of BTS. When I went back home to Korea, a news feature seemed to highlight the latest achievements of BTS at least once a day. My dad, who is usually unresponsive to anything K-Pop, always smiles proudly at these mentions, and shouts a hearty, “Yeah! Gooo, BTS!” each time. When I hang out in Hongdae, a popular, touristy area in Seoul, I hear BTS songs trickling through every other store and cafe, and see Korean college students and enthused foreigners surrounding the buskers singing acoustic covers of BTS songs, or dancing perfectly to the group’s notoriously rigorous choreography.

Such instances are just a few of many indications that BTS is one of the major forces at the forefront of increasing awareness and interest in Korea, and I know many Koreans agree with me when I say that this group is truly Korea’s current pride and joy. In the American entertainment industry, a scene where Asian representation is very much needed, BTS is a shining beacon. They are, without a doubt, playing a significant role in bridging the artistic, cultural gap between America and Korea. 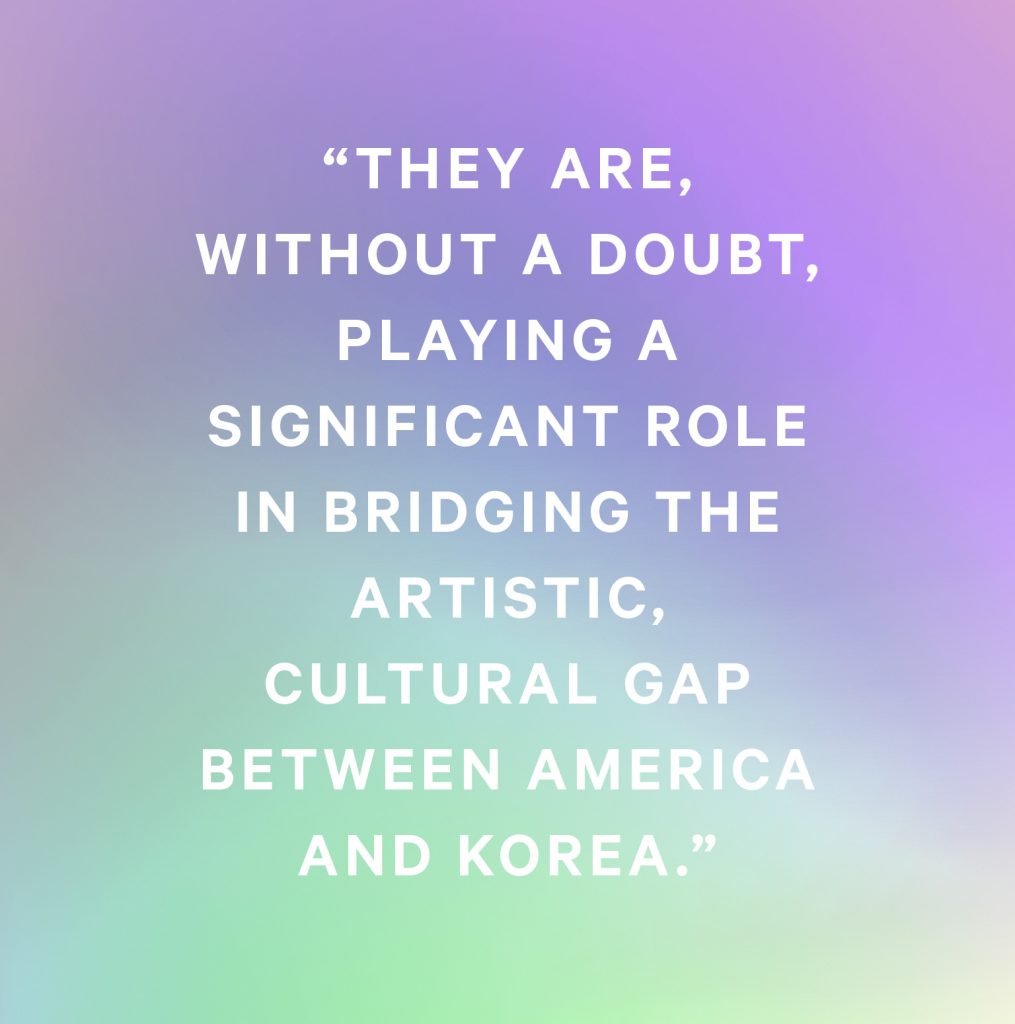 In the midst of their efforts to bridge that gap, however, I see both positive and negative stigma inevitably begin to form around Korea, its people, and its music, manifested through conversations on the streets, in class, amongst my friends, and, most prevalently, online.

The achievements of BTS have been talked about extensively, and it’s easy to get swept up in that. But seeing someone’s tweet about how it was “scary” when girls found Korean men attractive, made me take a step back from all of the positive buzz surrounding BTS and instead think of the other, more negative consequences happening collaterally as a result of their fame. What sort of precedent is being set for other kinds of music that are being exported from Korea? What kind of stereotypes are being reinforced about the people of my country?

Because K-Pop is essentially a foreign commodity, it makes sense for some to feel unfamiliar when encountering K-Pop for the first time. One such factor of unfamiliarity brought up frequently is the “intense” makeup, which is a stylistic choice likely due to the result of very specific beauty standards in Korea. There are aesthetic expectations, especially for celebrities (male and female alike), to be skinny, clear-skinned, and have milky-white complexions. Anything else is blatantly teased about and critiqued on the internet and on TV.

I believe that K-Pop’s relationship with makeup, especially through boy groups, can help destigmatize the idea that makeup is only for women and alter the way masculinity is traditionally viewed. Seeing male actors and musicians model for beauty brands, watching videos of them getting their makeup done backstage, are all familiar content to most Koreans. From the start, K-Pop has always been about more than just the music. The performative aspect is just as important as the songs, from the impeccably synchronized choreography to the trendsetting designer clothes. 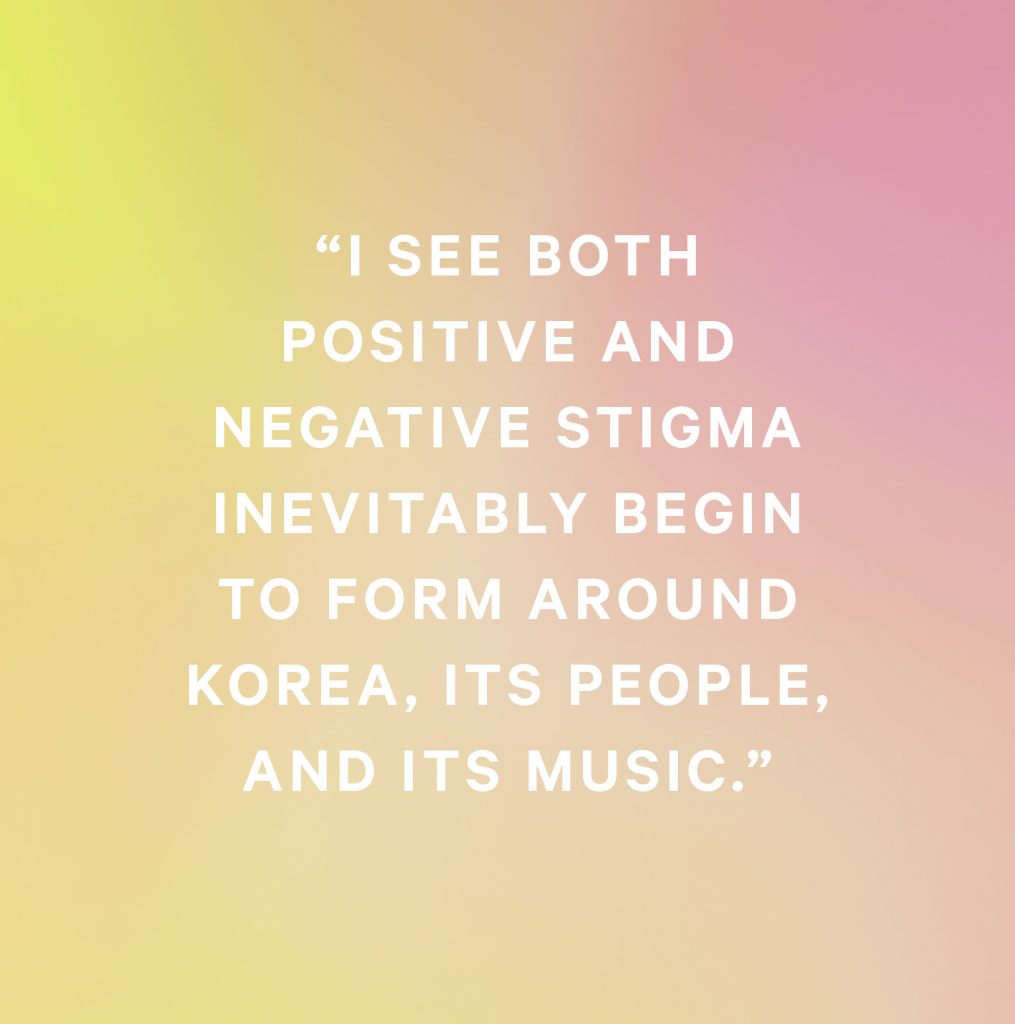 Another frustration that I know some English-speaking fans experience with BTS is the group’s (besides member RM’s) lack of fluency in English. English proficiency seems to be an expectation to anyone who wants to step into the mainstream American music scene (and, of course, the country itself). But I was still shocked and angry to see many racist sentiments towards BTS, particularly after their acceptance speech at the 2017 Billboard Music Awards. It made me realize how much more Asian representation was needed in the American entertainment industry. Under no circumstance was any of those tweets things that needed to be said, in particular to a group of artists who have left their home country to receive a special award and to perform for a set of excited, devoted fans on another continent.

I understand this frustration to an extent. Anybody who’s traveled outside of their home country or tried to speak/interpret another language would understand the frustrations of a language barrier. It becomes difficult for one to feel a sense of connection, especially when you can’t understand them. But these K-Pop singers are not American pop stars, they are Korean. That fact must be respected. Persistently asking them to speak English on live streams, or asking why they won’t release an entire album in English, or asking how they expect to “break through” in the American entertainment industry without learning English is an issue in the mindsets of the people making the demands, not the artists. These artists have no obligation to speak English.

BTS deserves all the success and fortune that comes their way as a result of their hard work and talent, and they are a very important role in this next chapter of K-Pop history. Despite all that they have achieved on their own, it is important to acknowledge and respect all the major figures that helped shape K-Pop to be what it is today. Groups like Seo Taiji and the Boys, Sechskies, TVXQ, Big Bang, Wonder Girls, and SNSD, set up the foundation for BTS to grow upon. There are not enough detailed articles, like this one from Vox, that take the time to analyze and understand all the other important influencers and elements of K-Pop. So when I see BTS fans, called “ARMY,” undermine the history of K-Pop with various tweets  vocalizing that the only influential player in the entire K-Pop movement is BTS, it’s frustrating, because in reality there is so much more behind what makes the movement what it is today. 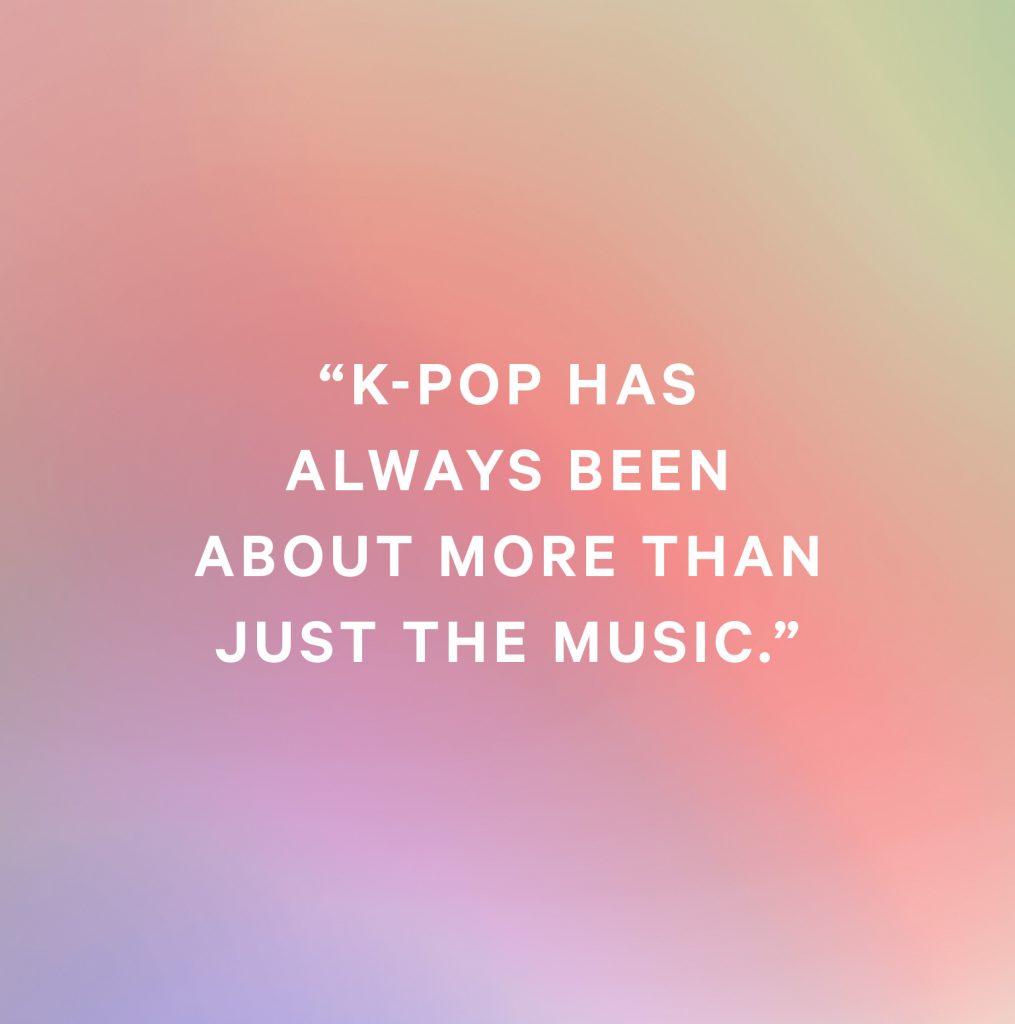 I can only hope people respect and make themselves familiar with the history and culture of Korea, especially when it belongs to a group of people they love. It’s one thing to be a devoted fan to an ensemble of talented artists and another thing to blindly follow and consider them to as the be all, end all, of K-Pop. Seeing tweets from time to time by (usually) BTS fans shooting down older boy groups like Big Bang or EXO, calling them “irrelevant,” is upsetting. How much is BTS’ fame really contributing to the global appreciation and understanding of Korean culture and musical history?

Another issue, not talked about enough in the media, in my opinion, is the increasing fixation on Korean males by some BTS fans. There are countless tweets by foreign fans claiming that they want to date or marry a Korean man based on their attraction to BTS or because they love the way a certain BTS member looks.

In another instance, a video went viral in the K-Pop Twitterverse and on Facebook of MeiKCJ, a Colombian YouTuber who lives in Korea, conducting a “social experiment” in which she pretends to fall asleep against random Korean men and women on the subway despite the Korean law which prohibits someone from taking photos or filming videos without the person’s knowledge or consent. As many spoke up about the odd, creepy nature of the video, BTS fans came to defend her. The video has since been taken down due to backlash, but the clips floating around the internet were enough to make me feel uncomfortable and make me question what the point of such an “experiment” was. 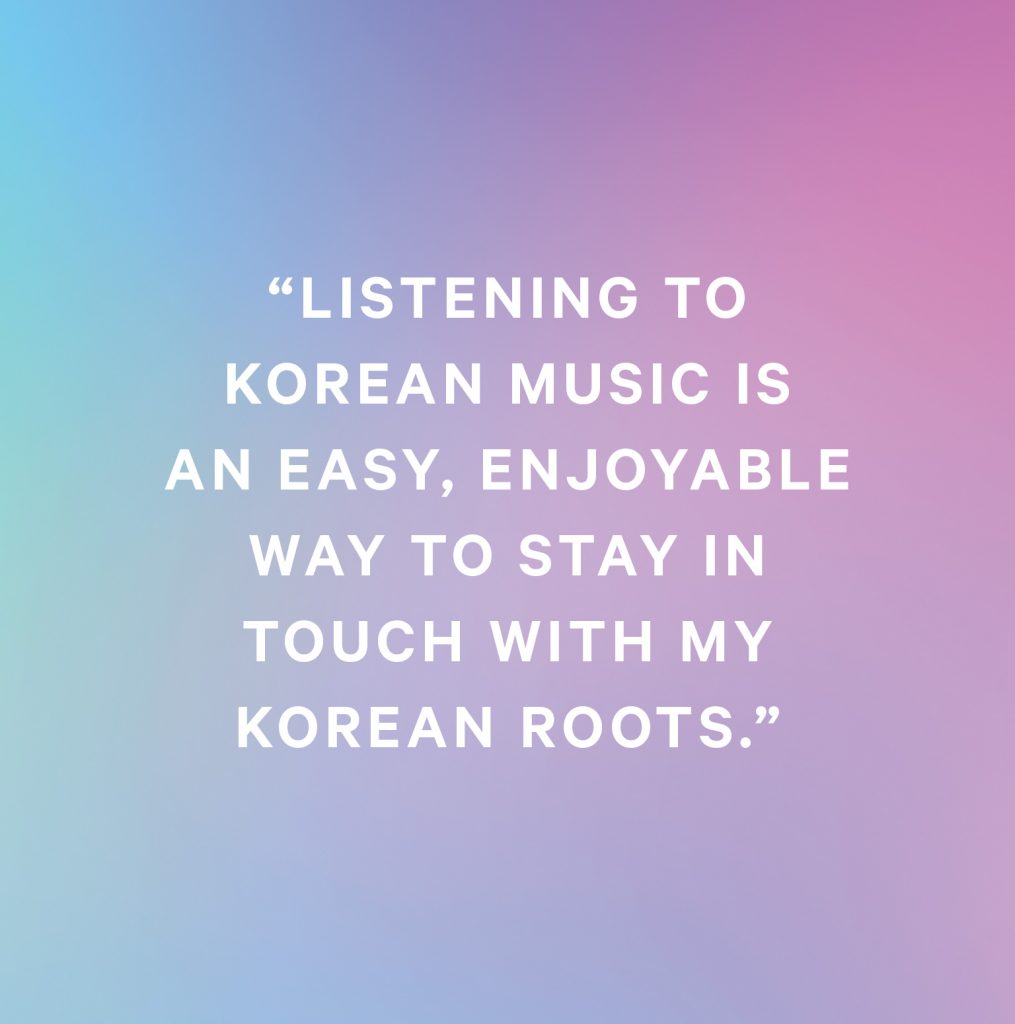 This kind of fixation has been an issue since before BTS’ fame, but the situation only seems to be exacerbated by the increasing popularity of BTS rather than being addressed. There is a very definitive line between respecting and admiring a culture and being obsessive and going so far as to fetishize certain aspects of it, and I want to trust K-Pop fans to know the difference – to be smart enough to distinguish and act accordingly.

Despite various negative stigmas surrounding K-Pop (comments implying that K-Pop ‘isn’t real music,’ is ‘too fake,’ or is straight up just ‘weird’), I’m not at all ashamed to say that I love K-Pop and other facets of Korean music, whether it be other “idol” groups like WINNER, indie bands like HyukOh, or solo artists like IU. Listening to Korean music is an easy, enjoyable way to stay in touch with my Korean-roots, and with its rising prevalence in the international scene, I believe it is more important than ever to stay attuned to what is such a huge part of my culture. Thanks to BTS, the swell of pride I feel when I hear my mother tongue being spoken on major international award shows, or on talk-variety shows like The Ellen DeGeneres Show, is unfamiliar and unexplainable in a great way. It is impossible to ignore what BTS has done, and is currently doing, for Korean cultural interest, tourism, and musical legacy.

At the same time, as I express the discomforts I experience in relation to this international popularity, I am not expecting or asking every single one of their fans to be completely well versed in Korean pop culture history. Nor are my thoughts synonymous with every single Korean-American out there. Nor do some of the frustrations I bring up apply to every single K-Pop fan. But if you adopt a narrow-minded, racist perspective on Koreans and the success of K-Pop, or if you are going make undermining claims about important elements of the legacy of K-Pop, parts of its history that Koreans are aware and proud of, that is what becomes an issue and where I would ask you to think about what you’re saying (or tweeting) one more time.

Your Favorite Plant Is Also a Surprising Skincare Hero